Researchers at ETH Zurich university have pioneered a method of robotic construction, which is being used to create a computer-designed modular house in the city.

The project, known as Spatial Timber Assemblies, uses computers to model the optimum design for individual units, which are then built by a series of robots.

The first robot takes the timber beams and saws them to the correct size. Following an automatic tool change, a second robot drills the holes required for bolting the beams together.

Two robots then work in tandem to position the beams in place, controlled by an algorithm that continually recalculates their path of movement to prevent collisions. Human workers are still needed to manually bolt the beams once in position.

The computer-produced geometric structure means the modules do not require reinforcement plates, keeping required building materials to a minimum.

"If any change is made to the project overall, the computer model can be constantly adjusted to meet the new requirements," said Matthias Kohler, professor of architecture and digital fabrication at ETH Zurich.

"This kind of integrated digital architecture is closing the gap between design, planning and execution."

It is the first large-scale architecture project to make use of the robots in ETH Zurich's new Robotic Fabrication Laboratory.

Six of these modules, using a total of 487 wooden beams, are being prefabricated in the laboratory before being transported by lorry to the construction site in Dübendorf, a suburb of the Swiss city. 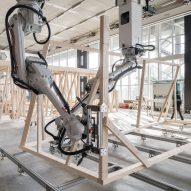 Here they are to be assembled to form a two-storey residential unit of 100 square metres. A transparent membrane facade will ensure the computer-generated and robot-executed timber geometry remains visible.

The unit will integrated as the topmost floors of DFAB House, a project that combines five new digital construction methods that are being taken from research and applied to architecture.

Other new technologies being applied include a robot that builds 3D mesh moulds that provide the framework and reinforcement for irregular, non-linear concrete walls, and 3D-printed ceiling slabs.

DFAB House is a collaboration between eight ETH Zurich professorships and construction industry experts as part of a project for the Swiss National Centre of Competence in Research, facilitated by NEST (Next Evolution in Sustainable Building Technologies).

Other recent projects from the Swiss university that combine architecture, design and robots include a 3D-printed skeletal concrete canoe, and a shingle-covered pavilion that harnessed robotic fabrication to minimise construction waste.