Architecture firm BIG has created a small black cabin with an angular roofline in the Hudson Valley, as the first model for prefab-housing startup Klein.

BIG's prototype, named A45, is the first in a series of tiny homes by well-known architects that Klein plans to offer customers.

Constructed in Upstate New York, the one-storey building has a minimal footprint of 183 square feet (17 square metres), which includes an open-plan living and sleeping area with small cooktop, bath and a lofted area.

It comprises a series of triangular walls made from dark-finished pine that curve up to form a pitch, similar to the A-frame cabins typical of the region. However, A45 has a square base with a twisting roofline, providing a new take on the traditional style.

"The design evolves from the traditional A-frame cabin, known for its pitched roof and angled walls which allow for easy rain run-off and simple construction," said the firm. "The resulting crystal-like shape gives A45 an ever-changing appearance."

BIG's cabin is built from modules that are assembled on site, resting on four concrete piers. This method is intended to allow owners to construct their tiny houses in remote areas, without the need for heavy machinery.

Most of the materials are fully recyclable, including the timber frame, wall modules, a subfloor, as well as the triangular floor-to-ceiling windows.

The A45 cabin is available to be customised inside and out, and this prototype includes fixtures and fittings from various Danish firms.

Upon entering is a single space with ample glazing. A Morsøe wood-burning fireplace is nestled in one corner, while a small kitchenette is designed with light wood cabinetry by furniture makes Københavns Møbelsnedkeri. 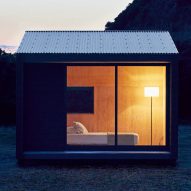 Light-coloured Douglas fir covers the floors, while the pine exterior frame is left exposed inside, with insulating natural cork panels in between.

The bathroom is clad of cedar wood, with faucets and handles by Danish brand VOLA. Other pieces decorating the small cabin include products from furniture brand Carl Hansen & Son, and a bed designed by Soren Rose Studio that is fitted with Kvadrat fabric.

The cabin "reflects a minimal Nordic abode prioritised for 'hyggelig' comfort and design", said BIG, which is headed by architect Bjarke Ingels and has offices in Copenhagen, New York and London.

Hygge is a Danish word that describes a mood of cosiness or comfort, with feelings of wellness and happiness.

Klein, led by Danish interior designer Soren Rose and with offices in Copenhagen and New York City, intends to launch a variety of tiny house concepts designed by the world's leading architects. The company claims it can deliver its cabin designs anywhere in the world within six months.

The prefabricated cabins are intended to serve the growing number of city dwellers wanting to escape to nature, for which many options already exist.

They include a series of tiny houses created by Harvard students, a glazed shelter by another Danish company, Vipp, and a micro home by Japanese brand Muji. 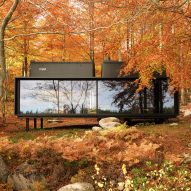