Elon Musk is insisting that the escape pod he hand delivered to the cave rescue team in Thailand is fully functional, after being criticised by the head of the mission.

According to the BBC, rescue head Narongsak Osotthanakorn thanked Musk's team for the offer of help and acknowledged the mini submarine they built was "technologically sophisticated", but said it was "not practical with our mission".

But Musk is claiming that his design was developed in close cooperation with the Thai-led team of international diving and medical experts, who were working with Thai Navy SEALs to rescue the Wild Boar youth football team.

Musk was told his pod "may well be used"

The SpaceX founder took to Twitter to refute claims his contribution was unwanted by the rescuers, releasing a screenshot of his email correspondence with Richard Stanton, one of the British expert divers who first discovered the boys.

"It is absolutely worth continuing with the development of this system," Stanton wrote to Musk on 7 July. "If the rain holds out it may well be used."

The tech billionaire replied that he was testing the submarine and that he was operating under the same principles as spacecraft design, namely "no loss of life even with two failures".

Stanton then replied that the rescuers were "worried about the smallest lad" and implored Musk to keep working on his technology.

The Guardian reported the weakest boys were left until last during the rescue, including 11-year-old Chanin Wiboonrungrueng.

"Mini-sub" left with team for possible future use

Musk revealed on Twitter two days ago that he was working on a "kid-size submarine" that could be used to rescue the 12 boys, aged 11 to 16, and their 25-year-old coach, who had been trapped miles underground in a flooded cave system for almost two weeks.

He and his team then flew to Thailand to deliver the escape pod, which was devised from SpaceX rocket parts, to the rescue effort.

In the end, it wasn't needed. The trapped boys and their coach have all now been rescued, after being guided by divers through the dark, waterlogged caves.

The former Thai provincial governor (described inaccurately as “rescue chief”) is not the subject matter expert. That would be Dick Stanton, who co-led the dive rescue team. This is our direct correspondence: pic.twitter.com/dmC9l3jiZR

But Musk said he has left the "mini-sub", which he named Wild Boar after the stranded youth football team, at the caves in Thailand "in case it may be useful in the future".

The billionaire also spoke out in response to the BBC's coverage of his actions, in an article that mentioned his net worth and referenced critics who claimed he was only helping as a self-serving PR stunt.

"Ironically, the 'billionaire' label, when used by media, is almost always meant to devalue and denigrate the subject," he suggested.

Musk's engineers worked around the clock to convert a liquid-oxygen transfer tube from a SpaceX Falcon rocket into a rescue submersible, with design input from Stanton.

The mini-sub has an aluminium hull and a nosecone to protect it from the cave walls, with four oxygen ports located at the front and rear. Buoyancy can be controlled by strapping diver weights to the outside, held in place by the six handles along the sides. Musk claimed it could withstand water pressure 10 times of that in the caves.

Occupants enter and exit via a dual O-ring seal at the back, which was left clear to give rescuers a visual connection with the person inside.

When one fan suggested on Twitter that he add some way to play calming music for the boys Musk replied that he would add a pocket for an MP3 player.

The engineering team also made a special smaller version of the tube that could fit through a 38-centimetre choke point in the cave. 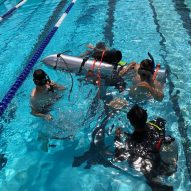 Musk told his Twitter followers that the technology could be applied to space travel if used as a blueprint for an escape pod. He said it could also be used to transport "vulnerable patients in dangerous environments" on Earth, either underwater or through toxic gas.

International team worked together to save boys

The tech entrepreneur got involved in the rescue after being implored on Twitter by fans. He started by sending engineers from his SpaceX and Boring Co teams to Thailand to offer assistance and see how his technologies could be applied.

The tech CEO hypothesised several solutions, including using radar technology from The Boring Company – his drilling company – to help drill an escape route down to the cave, and inserting an inflatable tube with airlocks through the tunnels.

Just returned from Cave 3. Mini-sub is ready if needed. It is made of rocket parts & named Wild Boar after kids’ soccer team. Leaving here in case it may be useful in the future. Thailand is so beautiful. pic.twitter.com/EHNh8ydaTT

The boys were discovered by two British divers 10 days after they had gone missing, and rescuers had to work hard to deliver food, oxygen and medical assistance to the group whilst planning their escape.

Initial plans involved draining the flooded tunnels with pumps so the group could walk out. But the threat of monsoon rains and dropping oxygen levels in the caves prompted officials to enact a daring rescue, where the boys were taught rudimentary diving skills in the cave before swimming out.

Guide ropes were installed to mark the way through the dark submerged tunnels for the boys and their coach, who were each accompanied by two Thai navy SEALs on their perilous journey.

Former Thai navy diver Saman Gunan died returning from a mission to deliver oxygen to the group on Friday, after losing consciousness on his way back.