The Trump Baby blimp is an attempt to communicate with the US president "in a language he understands", says the graphic designer behind the project in this exclusive Dezeen movie.

The over-sized balloon, which flew above Parliament Square in London this morning to protest Donald Trump's visit to the UK, sees the US President reimagined as a baby, with small hands clutching a mobile phone.

Matt Bonner, who works as a graphic designer for activist groups and designed the inflatable, says that depicting Trump in this way was an attempt to get under the president's skin.

"It seemed like an appropriate symbol of someone of his temperament," Bonner explains in the video, which Dezeen shot this morning at Parliament Square Gardens in London.

"We're using this language of mockery, because this is a language that he understands," says Bonner. "So we're giving him a taste of his own medicine."

According to the designer, the cartoonish form of the ballon was partly the result of the restrictions of working with an inflatable, which limited the complexity of its shape and colour palette.

"Printing on an inflatable is quite limited, it can't be too detailed," he says. "The shape of the inflatable has to be quite simple. The hand clutching the phone was the most complex bit."

"He's got this orange glow to him, his face is slightly redder, he's got more anger in his face."

Despite the comical appearance of the blimp, Bonner asserts that there is an earnest political sentiment behind it.

"There's a really serious message behind this silly stunt, and that's that we don't approve of him and we don't welcome him here," he says.

"I think that there is a strong link between art and politics. It's a very powerful tool," he continues. "It's perhaps one that we don't use enough, so hopefully this can inspire others to take similar action." 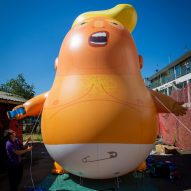 The blimp, which its creators funded through a crowdfunding campaign, was approved for flight by London Mayor Sadiq Khan after a petition was signed by over 10,000 people. Its flight kicked off a day of nation-wide protests against Trump's visit to the UK.

Bonner's team of self-professed "Trump Babysitters", clad in red costumes that referenced Trump's Make America Great Again hats, filled the inflatable with helium and raised it into the sky above Parliament Square Gardens at 9.30am to a chorus of cheers from the crowd below.

The two-hour flight was watched by a group of around 2,000 onlookers, but attracted the attention of the global media.

"The spectacle that the baby has created is really speaking to people," Bonner claims. "If he's played even a small part in dissuading Trump from coming to London, then our work here is done."

Last year artist Mike Mitchell created a symbol of protest against the president to use at rallies against Trump's inauguration, which features the number 45 turned on its side to resemble a swastika.