Shtanuk has established a fundraising campaign on crowdfunding website Indiegogo to raise $17,500 (£13,335) to bring the Blanket installation to Burning Man, taking place in the Nevada desert from 26 August to 4 September 2018.

His proposal involves joining together a series of NASA's space sheets, which the US space agency developed in 1964 from a reflective material that provides insulation.

Measuring 2.1 by 1.6 metres, they are intended to be used to warm people up in emergency situations, and today are commonly given to runners following races.

Shtanuk plans to use reinforced tape to form a huge square version that spans 100 metres each side. It would be allowed to billow in the wind, casting a shadow over a large section of the desert so visitors could rest in the shade. Alternatively, it could be laid on the sand and used as a seating area.

"The Blanket will be constantly changing its silhouette by the power of wind, taking different surreal forms – waves, mountains or some giant fantastic sculptures," said the statement on the project's fundraising page.

"During the hot daytime room under the Blanket will be used as a comfy and refreshing rest area, where anyone can relax, chill, have a nap or dance." 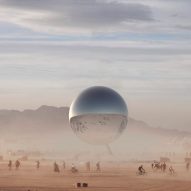 At night time, the artist plans for the installation to take on an entirely different function. He imagines participants dressed in suits featuring electroluminescent wire – also known as el-wire, and created by coating copper wire a glow-in-the-dark phosphor.

They would then crawl underneath the blanket, "creating an effect of oceanic bioluminescent plankton or moving waves of equaliser".

Funds for the project will go towards materials, renting a space to assemble the piece, transporting it from Russia to Burning Man, as well as equipment rental.

BIG architects Bjarke Ingels and Jakob Lange are also raising money to build a huge, inflatable mirrored sphere at this year's festival, and have raised 35 per cent of the total so far.

Burning Man attracts 70,000 visitors annually, and its community is responsible for building an array of elaborate structures around the temporary settlement known as Black Rock City. 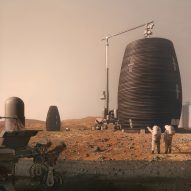 The festival's founder Larry Harvey, who died earlier this year, explained the importance of urban planning during the 10-day event in a 2015 interview with Dezeen.

Previous Burning Man installations have included an artificial tree illuminated with "light flocks" by Studio Drift, and many more freestanding structures and artworks.

Each festival also features a main temple building, which is sent up in flames on the last night. French architect Arthur Mamou-Mani is designing this year's as a spiralling wooden structure.