The two-storey shop is located in the city's design district, joining a roster of high-end fashion brands including Gucci, Tom Ford, and Louis Vuitton.

Céline already has branches in New York and Beverly Hills. For the design of its third bricks-and-mortar store in the US the fashion label tasked Valerio Olgiati with designing a space that could house its ready-to-wear and accessories collections in full.

Left with a largely open brief, the studio decided to deck out the store's facade, walls and floors in Brazilian Pinta Verde marble.

Inspired by the material's unique blue-green patina, they wanted to create a "place where an internal universe can be imagined." 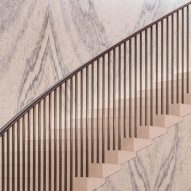 The architects cut away parts of the basement's ceiling to insert two pyramid-shaped volumes, which burst through into the shop's ground floor – one forms a pitched stairway, while the other accommodates the peaked top of a chunky concrete column that sits directly underneath.

Thick slabs of marble have been used as display stands for shoes and handbags, while clothing items are hung on simple brushed-brass railings. Further textural detail is added by grey, suede-like rugs and cushion seats.

Back in 2012, Valerio Olgiati used solely concrete to form the monotonous facade of an agricultural school in eastern Switzerland.

Much like the practice, London-based architects Rundell Associates employed marble to create a sweeping staircase for Harrods' Fine Watches department, which is intended to resemble a timepiece.