An exhibition in Hyères, France, features a decade of work by designer Philippe Malouin, including a cast-concrete stool imprinted by a bottom and an armchair made entirely from foam.

The retrospective exhibition, titled 10 Years, is on show at Villa Noailles, a modernist house designed by architect Robert Mallet-Stevens in the 1920s.

It opened on 29 June to coincide with the Hyères Design Parade festival, where Malouin was guest of honour. But the date also marked exactly 10 years since the British-Canadian designer opened his studio in London.

What ties all these projects together, said the designer, is that they are all made to last a long time, rather than to follow trends.

"I am interested in making quality products for people's lives," Malouin told Dezeen.

"I want these products to last and appear to be very simple and reduced in design, as design becomes incredibly replaceable and fashionable. I would like to believe that I may be producing work that will last."

The show is organised in chronological order. The first pieces presented are the Hanger chair, which featured in Dezeen's old office, and the inflatable Grace table.

Other highlights include the patterned wooden Extrusion bowls and the recent Press mirror, made from a squashed metal tube. There's also the Seven Dials installation that was commissioned by Dezeen.

"People who visit do not necessarily possess a knowledge of design, therefore we wanted to present everything as simply as possible," Malouin explained.

"It was difficult to choose all of the pieces for 10 years of work. We have worked on such a range of projects that it was an incredibly arduous task," he continued.

"We decided to work on objects as they are easier to display and easier for most to understand. It is a shame that we could not show our larger design interventions, but we wanted to keep the message simple and understood."

One of the designs that Malouin is most proud of is Gridlock, a collection of furniture that features stone slabs on top of brass grid structures.

"The entire system was designed while making experimentation for a gallery show," Malouin told Dezeen. 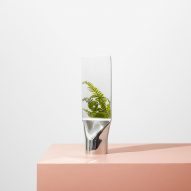 Philippe Malouin's Press mirror is made from a single metal tube

"We developed all of these industrial components that would ultimately be hand-assembled, as there was no other way of producing them in one go industrially. The result is a very industrial product with artisanal assembly."

"This collection is one of our big sellers," he added. "It is always nice to see a product perform well and contribute to your income!"

Another of the designer's favourites is the Group sofa and armchair, which feature low profiles and rounded seats. The chair has a black powder-coated steel swivel base, while the sofa sits close to the ground on small feet.

"The geometry was created while making collages and using cardboard cutouts," said Malouin. "The fact that everything was created using circles lead us to focus on a chair that could revolve and take little floor space."

One of the most noticeable additions is the Mollo armchair, which has a rounded body made entirely of expanded polystyrene foam.

"The Mollo armchair got its shape when we took apart a cheap mattress to use its polyurethane foam. We folded the foam on itself and tried to fashion the shape of a sofa," Malouin revealed.

"The goal of the experiment was to use standard square cut foam in order to produce a 100 per cent foam sofa," he added. "I would love to revisit this design in order to create more iterations of it."

10 Years is on show at Villa Noailles until 27 September.