Rozenberg's graduation project, Building Without Bias: An Architectural Language for the Post-Binary, centres around an online calculator that allows you find out whether a building is biased or not, and helps you to add or subtract elements to improve the balance.

The designer started the project after discovering the "disturbing" link machines make between architectural space and gender.

Imagining a future where buildings are created using algorithms, Rozenberg wanted to find a way to highlight the gender biases embedded in architectural terms learned by technology, to make it easier to produce "post-gender architecture".

"As technology is increasingly used and trusted in all disciplines, architecture included, I wanted to understand whether these tools could be considered unbiased," Rozenberg told Dezeen. "If the spaces from the future are designed by algorithms, will these be free from hidden biases?"

"As automated technology finds its way into our bodies, buildings and cities, it is essential that it be designed in a way that is free from insidious biases," she said. "The artificially intelligent tools that we use on a daily basis amplify and sediment existing gender inequalities."

A word entered into Rozenberg's website Building Without Bias returns a "gender unit", or GU. The higher the GU value, the more feminine the term is perceived by machines.

At 268 GU, the word homemaker has one of the highest female readings. As part of her project, Rozenberg has used it as the starting point for five gender-neutral structures: a cinema, a theatre, a library, a sheltered bench and a newspaper office. 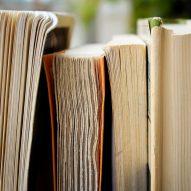 "This is one of the words that triggered this entire project," she explained. "When researching machine learning, I read an article which showed that through their teaching, machines understand that 'man' is to 'computer programmer' what 'woman' is to 'homemaker'."

"This infuriated me and motivated me to develop a project that would reveal and revise these biases."

Rozenberg developed a set of formulae to determine the overall gender of architectural spaces based on the values of their components. The spaces she proposes all have a reading of zero GU – neither male nor female.

She selected the central London neighbourhood of St James's as a test-site for her structures. The area is famous for its male-only membership clubs, and on discovering the word club has a reading of -185 GU, Rozenberg sought the opportunity to create a less gendered environment.

"In 2018, St James's is still a very exclusive area, with many gentlemen's clubs and gendered businesses. These institutions are visited by white, wealthy men, and their doors are closed to women or to those who do not belong to this elite," she said.

"The ideal gender neutral masterplan is one in which buildings are no longer individual, exclusive spaces and where the boundaries between programs, forms and genders are merged."

To create a larger building such as a cinema or library, she developed a more complex formula: (SUM (architectural elements)) x (SUM (typology)) = 0

The designer created the project for the MA programme at the RCA. She presented it during the end of year show in June.

Other graduates from this year's programme include Joseph Mercer, who proposed building Netherlands-style greenhouses on London's green belt to intensify food production.