Fast-food chain McDonald's has replaced its iconic restaurant in Chicago with a building by Ross Barney Architects that is "unlike any in the company's portfolio".

The new outpost opened on 9 August 2018 in the city's River North district, on the site of the Rock N Roll McDonald's that served as a flagship for the chain, but was demolished last year.

Its replacement – designed by local firm Ross Barney Architects – is a steel and timber structure that boasts a number of sustainable elements, and has been compared to tech giant Apple's stores by several news outlets.

"McDonald's newly designed restaurant at Clark and Ontario streets is unlike any in the company's portfolio," said a statement.

The 19,000-square-foot (1,765-square-metre) building has several energy-saving features, including a canopy of solar panels that spans far beyond the exterior glass walls to create sheltered outdoor spaces.

Over 70 trees are planted at ground level across the plot, including native and drought-resilient species interspersed between permeable pavers, to minimise irrigation and reduce storm-water runoff.

In the centre of the building sits a raised garden of ferns and white birch trees, housed within a glazed volume. Greenery also covers portions of the roof, while green walls are suspended from the ceiling inside. 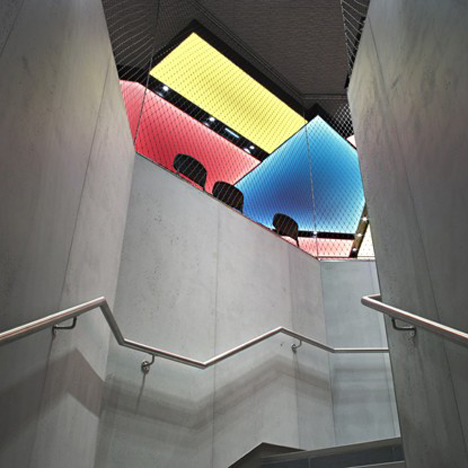 The double-height interior is decorated with a pared-back palette of pale wood, grey surfaces and black furniture. This – along with the building's glass cube form – has caused the comparisons to Apple stores, which often feature a similar minimal style and the same materials. The company trademarked the "distinctive design" of its retail spaces in 2013.

The furniture, graphics and layout at the McDonald's were designed by Sydney-based Landini Associates, which has worked with the company on previous projects – including a pilot in Hong Kong.

Other features at the 24-hour Chicago location include self-order kiosks and table service, as well as mobile ordering, payment and delivery.

"This is one of the most amazing McDonald's restaurants I've ever seen and a great fit for this iconic location," said McDonald's owner-operator Nick Karavites.

The Rock N Roll McDonald's occupied the site since 1983, but was replaced in 2005 with a building that used the company's golden arches as huge structural components.

McDonald's is best known for its bold-coloured and brightly lit restaurants, but the company has made several moves to change this image over the past few years.

On the Champs-Elysées in Paris, Patrick Norguet created an interior for the brand featuring raw concrete and sheet metal, after a series of outposts he designed across France. Meanwhile, a McDonald's restaurant in Rotterdam by Mei Architects boasts a golden facade and a spiral staircase.

Ross Barney Architects was founded by Carol Ross Barney in 1981, and is behind projects including the recently completed Chicago Riverwalk, and a transit station in the city that is housed within a perforated tube.