Steven Holl's recent proposal for Dublin, and its tenuous reference to a landmark 160 miles away, is symptomatic of architects' obsession with fake meanings, says Sean Griffiths.

The recent unveiling of Stephen Holl's design for University College Dublin's campus has generated a bit of a furore. People have been getting rather upset about the American architect's claim that the building's angular forms are "inspired" by the extraordinary geometries of the island of Ireland's most famous natural landmark, the Giant's Causeway.

In a manner that recalls the US president's antics on the golf courses of Scotland – and his approach to international relations in general – it appears as if Holl, clad in plaid shirt and high-waisted trousers, has metaphorically marauded across the landscapes of the emerald isle and, in doing so, failed to spot a couple of not unimportant details. Firstly, the geographical inconvenience that the Giant's Causeway is not, in fact, anywhere near Dublin, and secondly, the unfortunate faux pas of neglecting to notice that the world-famous landmark is not actually situated within the borders of the country of which Dublin is the capital.

But by crudely appropriating the geological wonder, Holl might actually have done us a favour. In reducing it to a crass form of commodification that gives his architecture no more value than that of an image printed on a souvenir tea towel, he has prompted us to ask: why do so many architects feel the need to engage with this kind of unedifying and clumsy projection of "meaning" in their projects?

The search for "meaning", "narrative" and "metaphor" is the disease of our time

Maybe it has something to do with the way late capitalism has emptied all sense of purpose out of contemporary life. Perhaps it is the reality that is ruthlessly presented to us by modern science – a science that has robbed us of our delusions about the meaning of life and its supposed higher purpose. Or is it just a loss of confidence in architecture to speak for itself?

Whatever the reason, it seems the search for "meaning", "narrative" and "metaphor" is the disease of our time. It affects all aspects of contemporary life, as demonstrated by the success of the self-help publishing industry, which itself packages up meaning into neat little consumable parcels.

For architects, the condition manifests in our apparent need to resort to crass metaphors, in a pathetic attempt to bolt some sort of superfluous, immediate and fully formed signification onto things we clearly fear would otherwise have none.

I think architects would do well to take note of the philosopher Ray Brassier, in his call for fellow thinkers to embrace a "mind independent reality" that is "oblivious to the ‘values' and 'meanings' which we would drape over it in order to make it more hospitable".

This is because architectural meanings are themselves nothing but consolatory fictions, often used for nefarious ends.

Take, for instance, the allusion to noble antiquity expressed in the grand Georgian estates that grace numerous British cities, which casts a less-than-noble veil over their connections to the ill-gotten gains of slavery and colonialism.

Or the celebration of English Christianity in the Neo-Gothic architecture of the Victorian period, which disguises the somewhat unchristian ethics that prevailed in the murderous exploitation of the factory system, whose proceeds financed it.

An even bigger problem is that these applied significations only represent ideas about something outside of the reality of the object. They are purely mental constructions. Their meanings have no grounding in material reality, hence they are superficial and unstable in nature.

As theorist Roland Bathes established in the 1950s, all meaning is entirely arbitrary. Classical architecture, for example, has enjoyed a colourful historical journey from its origins in the material world of sacrificial ritual to its later manifestations as idealistic expressions of scholarly antiquity, colonial power and modern conservatism, amongst many other things.

Modernism attempted, not entirely successfully, to do away with all of this sort of thing. And I think that, in our increasingly cringe-worthy clinging to the comfort blanket of metaphor, we have come full circle. It is perhaps time to question the necessity for meaning in architecture once again.

An interesting aspect of Holl's UCD building is that its chosen metaphor suggests that it should be treated as a sculpture to be contemplated, rather than as a building to be inhabited. In this sense, it exemplifies the distinction drawn by Denise Scott Brown and Robert Venturi between a "duck", a building that takes on a three-dimensional representational form in its entirety, and a "decorated shed", a building whose form is a generic and unpretentious product of everyday life, but to which representational decoration might be applied. 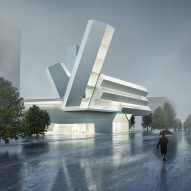 Venturi and Scott Brown were perhaps over-zealous in dismissing all buildings with strong sculptural characteristics as ducks. Their targets included the brutalist buildings of the 1960s and 70s, which have recently enjoyed a resurgence in popularity. These buildings were not entirely free of metaphorical allusion but, rather than aiming at a bogus commodification of context, the metaphors tended to be directed at more generic idealisms embedded within the architecture itself, such as the expression of materiality or a faith in technological progress.

I think it is fair to say that the design of buildings such as these was not driven by an overriding desire to manufacture spurious meaning. Indeed, one of the criticisms levelled at brutalism when it fell out of fashion in the 1970s was precisely its apparent lack of meaning.

Part of the reason why these buildings have become popular again is because they have now acquired meanings that have nothing to do with either signification, metaphor or narrative, nor with the design intentions of their architects.

We have a choice: architecture or revolution

The meanings associated with these buildings today reflect a material history or, more precisely, a lack of it. For these buildings are products of a time when, in contrast to the present, architectural endeavour was directed towards improving material life in the form of houses, schools and hospitals. They stand as monuments to a period when good quality affordable housing, in aspiration if not always in achievement, was considered a citizen's right.

If these buildings can be considered to carry meanings, then the latter are embodied not in some cheap contextual metaphor, but in an aspiration for material progress.

The buildings of the brutalist period also manifest an optimism about the future that, in the current political climate, seems absent. But one chink of light is that at some point soon, governments are going to have to build houses, schools and hospitals again. Perhaps they might do in a way that provides us all with material progress, so that architects can be spared the obligation to add pseudo-poetic overlays of commodified meaning. As Le Corbusier might have put it, we have a choice: architecture or revolution.

As architects, we might begin to prepare for this eventuality, not by fomenting a brutalist revival, but by developing an architecture that manifests once again the politics, technologies and material culture of the present. We can begin by dropping the obsession with imposing fake meanings and turn our attention to what really matters: the material conditions of our current reality.