Los Angeles-based art director Yusong Zhang has built himself a coffee table using over 10,000 Lego bricks, without screws or glue.

The bricks are arranged in four coloured layers, with white on the outside, then red, yellow and green towards the hollow centre.

Interlocking connections help to reinforce the structure and allow it to withstand the necessary weight.

"I never did a test on the weight it would hold, but I've using it as my own coffee table for a while," Zhang told Dezeen. "It's absolutely no problem if you want to put two feet up or a stack of magazines. It's very sturdy."

His aim was to create an object that was useful, but still easily identifiable as a playful Lego design.

"I always had love for Lego as a toy, but wanted to challenge myself to build something truly functional without sacrificing the aesthetic and creativity that's rooted in Lego designs," said Zhang, who has worked for a number of agencies in Canada and the US.

"The idea of building a Lego coffee table has been circling in my head for years," he continued. 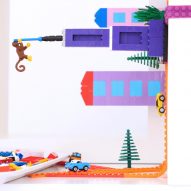 Nimuno Loops tape lets you build Lego on almost anything

After settling on a design, he spent three weeks building the table – mostly in the evenings after work. "It was a bit tricky to figure out the process, then it became repetitive," Zhang said, adding that he now hopes to experiment with different colour combinations.

His original is not for sale, but the art director would be open to custom orders if demand came from potential customers.

Lego is perennial favourite of architects and designers, who have used the toy to create everything from replicas of brutalist architecture to a personalised CV.

The Danish company recently opened its BIG-designed visitor centre – resembling a stack of giant blocks – in Billund, and created a model kit of the building to coincide.

Earlier this year, it pledged to launch sustainable bricks made from sugar cane to help reduce plastic waste.