Japanese architect Katsutoshi Sasaki has built himself a new family home, featuring a dark-painted facade of red cedar and a bright, airy interior.

Called T Noie, which refers to the house's T-shaped structure, the 102-square-metre, two property is located in Toyota, Aichi Prefecture.

From the outside, the tall and narrow building appears to have very few windows, with an uninterrupted facade of painted wooden planks. The only openings are clerestory windows that wrap around the top of the walls and a sliding glass door positioned on one side.

But in contrast to the dark exterior, the interior is lined with natural Falcata plywood and has a largely open-plan layout. It boasts a towering eight-metre-high ceiling that provides sight lines right from the top to the bottom of the building.

Sasaki, who leads the firm Katsutoshi Sasaki + Associates, lives in the house with four other members of his family, plus occasionally an intern working in his office. 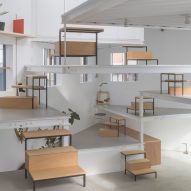 "In another point of view, the building height of eight metres is standard for Japanese houses," he continued. "It's the scale of the town."

"But the ceiling height of eight metres is special. It is the scale for connecting between the nature and the people. I am interested in the front and back of such a dimension."

The majority of light enters the house from the clerestory windows, then filters down through the spiral staircase and through the open rooms.

According to Sasaki, the lack of windows was partly to give privacy, but also "to make a light scape" where shafts of light enter from above.

The house is divided lengthways with rooms on either side measuring 1.55 metres in width, which Sasaki explained, is to create an intimate scale within the lofty open-plan space.

"The deliberately limited width of the architecture gives the comfortable margin between the living section and the office," said Sasaki. "I wanted to create the place where the sense of embracement and the laid-back breadth provided by the scale can coexist."

The rooms are laid out on platforms set at varying different heights around a spiral staircase. The four bedrooms, study and bathroom are on the upper levels, while the kitchen, dining room, library and indoor garden are arranged across the ground floor.

Sasaki established his architecture studio in 2008.

Other residential projects he has completed include an unusually skinny house on a three-metre-wide site and a hexagonal home that features suspended wooden slats hung across the central living room. 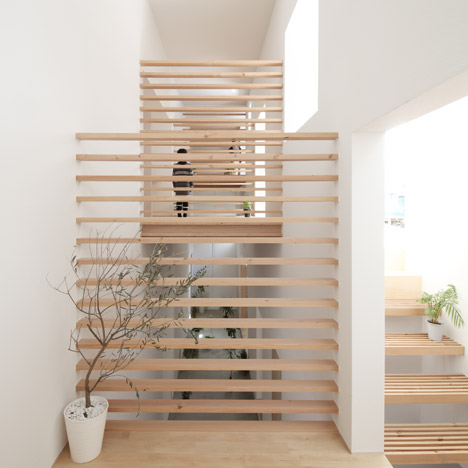