Dezeen promotion: the Dezeen x Samsung Ambient Mode design competition has been whittled down to a shortlist of five, who have shared the thinking behind their designs with Dezeen.

Seeing off tough competition from a 15-entry longlist, the finalists have been announced as Alex Warr and Zach Walters with the entry TimeFrame, Swift Creatives with Kinetic Decor, Jianshi Wu and Yitan Sun with Bird Clock, Gerard Puxhe with Architectural Extension, and Doisign with Sphere.

The €29,500 competition asked entrants to create a visual experience that displays when the TV is not in use. The shortlisted designers responded with the likes of a virtual architectural extension, a window to other parts of the world and a personal assistant that brings in data from the user's life.

Others took a more decorative approach, creating a calming, interactive mobile and a clock that brings nature and joy into telling the time.

The designs are for the Ambient Mode feature on Samsung's new QLED TVs. Ambient Mode makes the screen look almost transparent by mimicking the appearance of the wall behind the television, with additional imagery and information overlaid on top.

The winner will be chosen by a jury made up of graphic designer Neville Brody, industrial designer Erwan Bouroullec, Samsung Electronics' head of the design centre Dontae Lee and Dezeen's editorial director Amy Frearson.

Judging is set to take place at electronics trade show IFA in Berlin, which takes place from 31 August to 5 September 2018, with the winner announced on 3 September 2018 on Dezeen. Each of the entrants shortlisted here receives €1,500, with €8,000 in prize money for the ultimate winner.

The winner will be displayed at the IFA show, and will have the opportunity to commercialise their idea.

Read on for interviews with the five shortlisted designers or design teams.

TimeFrame is a dynamic window, enhancing the user's space by creating a virtual connection to another environment. TimeFrame takes the archetype of a window and moves it forward by transforming it into something dynamic, creating a new type of window that morphs based on the hands of a clock, the activity in the room and the user's aesthetic choices.

Our design changes constantly throughout the day. We imagine that the content can change to mimic the time of day and weather in the user's location. Meanwhile, the shape of the frame morphs gradually throughout the day, following the hands of a clock. When motion is detected, the shape transforms more dramatically, distorting the movement of the clock hands and expressing the subjectivity of one's perception of time.

TimeFrame is designed for people who have a desire to travel, see the world, or experience other places. This includes people in the city that want to retreat to the countryside or people who want to explore the landmarks or cultures of faraway cities. TimeFrame is not meant to replace travel. It is designed to enhance and expand the possibilities for a user's space.

We plan to continue designing in the realm of architecture, as well as outside of it. This competition was outside the scope of our usual work, but it is one of many areas of design that we are interested in continuing to explore.

The prize money would allow us to continue developing our own design work. As we start our careers, this would be invaluable as we discover our voice and interests as designers.

Unlike today's personal devices, which often show time as plain digits, we designed a "bird clock", which uses an arrangement of birds to indicate the time of day. It gives a subtle notion of the passage of time and also makes the act of checking time less of a mindless errand but more of a joyful experience. We think Bird Clock is an example of how new technology like Samsung's Ambient Mode can encourage new ways we interact with technology.

The underlying colors represent the sky at different times of the day. The patterns are dynamic. It may show a wonderful morning glory, a full moon, or a clear sunny sky according to the real-time weather condition.

In addition, when the user or their pet walks past the TV, the motion sensor can detect the movement, and the flock of birds would fly away for a short moment before circling back. This interaction, very much mimicking how birds would behave in real life, adds more delight and playfulness to the scene.

This scene is created with the lifestyle of a nature lover in mind. We'd like to enhance the interior experience in the home or office environment, to reduce the anxiety for people living in big cities. With Bird Clock, we add another dimension to their living/working environment with sound and movement.

As two architectural and visual designers, we are always open to new challenges in different disciplines and would like to transform more ideas through various media in the future.

We will be presenting our design at IFA in Berlin soon, and we really love the culture here. We may travel a bit more around the country and get more inspirations from the people and the city itself.

It's a design that aims to integrate the digital and the physical world in a believable way.

The LED lighting changes as time passes, as well as the sky in the background. It also changes when the space light does. Thanks to the QLED TV movement sensors, the flower or the flame of a candle will move when a person passes by, for example. A person's shadow can also appear in the niche if a person gets closer. There are many different possibilities.

The limitation of having the TV frame. I've integrated the design to the frame so it looks realistic and not just like an image, video or app in a frame.

What's next for you as a designer?

I haven't thought about it yet.

Television has only been a surface to watch when the time comes. However, Sphere acts as a personal assistant to an individual's life by using artificial intelligence and the Internet of Things.

Even if each individual has different daily schedules, it reacts and adapts accordingly and gets used to users over time by machine learning. Therefore it creates selected ambients, generates professional suggestions, tracks your life or shows specified information for its user.

Why do people need this in their lives?

The Internet of Things surrounds us every day with devices we use in our routines. Our identities are based on things we have done, we are doing, we are to do, shaping our decisions. Decisions that were previously solely made by us, have begun to be made in collaboration with dedicated applications and innovations. An immediate personalised home interface allows users to take their home to a new interaction level.

We are a group of two consisting of an industrial designer and an architect. We believe design — as a process — is not related with any profession or training, but an interdisciplinary experience. Just for this particular example, we learned a lot, tried some new things and failed miserably so many times.

Even thought it is not our field to design a user interface, we enjoyed the process and at the end are pretty happy about the product. We are motivated to continue our search about how can we widen our perspectives throughout other challenges.

We want to continue expanding this establishment for more professional competitions or design challenges with a larger group of people in a better environment.

A dynamic decorative mobile that provides a calming and reflective feature in the room featuring hanging fish that gently rotate around each other. Not wanting to simply replicate a physical mobile on the screen, we used the qualities of Samsung's QLED to bring enhanced features not possible in the physical world.

As light in the room increases our design gradually comes to life. Starting as static black fish, as the light increases they begin to move and as they rotate their colour begins to change.

The fish also react to sudden changes of light level or the proximity of a user. Their eyes blink with their "shadows" swimming off when disturbed and then slowly swimming back as the light and activity in the room settles.

Our concept is inspired by our Scandinavian roots, tapping into the fundamental pleasures associated with everyday living and the simple comfort of relaxing at home with friends, using technology to support not intrude.

We took inspiration from the classic handmade Danish mobiles of Christian Flensted, who made his first one in 1953 to celebrate the christening of his daughter.

We see the Samsung TV hardware platform as just the start of products becoming more intelligent and responsive to their environment, allowing us to develop more natural and ambient experiences enabled by emerging technologies like mixed reality and artificial intelligence.

As a Danish design and innovation team, with studios in Aarhus and London, we are fascinated by the possibilities of a mixed reality as our digital and physical worlds become increasingly interconnected and we move beyond screens to digitally powered product experiences.

Well for sure we'd use some of it to celebrate as a team. We'd then put the rest towards a Samsung QLED TV for the studio to start developing our concept into a fully formed design for release on Samsung's Tizen platform. 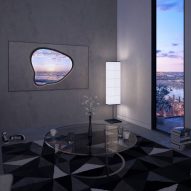