This low-slung residence in rural Connecticut, completed by New York firm Deborah Berke Partners, is clad in black siding to blend into the surrounding forest.

The Sackett Hill House is located in the town of Warren, roughly two hours from New York City by car. The home sits on an expansive property that enjoys distant landscape views, a feature that the architecture studio wanted to highlight.

A long driveway winds through the wooded site on approach to the residence, arriving at a gravel parking area at the front.

"Visitors walk on a stone path through an opening in a historic stone fence to reach the house, a subtle threshold that heightens awareness of the landscape," said Deborah Berke Partners in a project description.

The entrance to the L-shaped home is situated the intersection of its two wings. The longer volume runs from east to west, and contains the home's communal spaces and entertaining areas.

The shorter volume houses four bedrooms, one of which is separated from the others by a small lounge area for more privacy.

The interior sides of the "L" shape have generous openings that provide ample views of the property. Multiple doors in the southern facade allow direct access to the back yard from the vestibule, kitchen, and living room.

In addition to a terrace that extends the living room outside, the architects also included a screen porch at the eastern end of the home, and a private terrace for the master bedroom, which faces south. 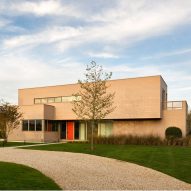 "It's hard to say which moment in the house is more rewarding," said Deborah Berke, who also serves as the dean of Yale School of Architecture. "It's fitting that you're rewarded when you reach each end of the house."

Dark polished concrete was used for the floors throughout the home, bringing a refined feeling to the space and reflecting ambient light. The interior walls feature vertical wooden boards similar to the ones used for the home's exterior, but painted white.

"The black-stained wood siding was a revelation," said architect Marc Leff, who led the project. "It almost reduces the house to a pure and simple volume that fits into the trees and unfolding hills."

Deborah Berke Partners works across a variety of scales and typologies, from office towers to the conversion of a historic insane asylum into a hotel. The firm has also completed a number of private residences in the US, including a modernist-influenced home in Indianapolis to a house in the Hamptons with two workout areas.