Renault rethinks how goods and services are delivered in cities with its Ez-Pro concept, which imagines autonomous, electric vehicles that connect up with a fleet of shared, customisable "robo-pods".

Each delivery service is made up of an autonomous "leader pod" and a convoy of driverless robo-pods, which can either follow each other as a platoon or move independently.

Both vehicles can hold parcels, but the robo-pods can also function as pop-up shops, food counters and other types of retail.

This is made by possible by the modular design of the robo-pods. Each one consists of a standard base, to which different units can be attached.

A human concierge would sit inside the leader pod, to supervise the process.

"Released from today's constraints of driving, the concierge can focus on value-added tasks, such as supervising the itinerary planning and driverless robo-pods, or ensuring efficient and customised service, such as in-person, premium delivery of groceries or fragile objects," explained Renault.

The Ez-Pro is intended to cater to both professionals and everyday consumers. Users simply choose the delivery time and location most convenient for them. 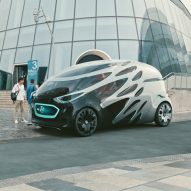 They would be able to choose between receiving their parcel from the concierge or by accessing self-service lockers in the driverless robo-pods. Accessible at all times of day, these would be opened by the user via a mobile phone application.

Managed by the same logistics operator, a convoy of pods could leave from the same hub carrying different types of goods and merchandise, already paid for and headed to different destinations. Each pod could make deliveries for a number of stores at a time to maximise productivity and reduce costs.

According to the company, last-mile delivery – from a transportation hub to its final destination –makes up 30 per cent of traffic in cities.

Ez-Pro hopes to contribute to there being fewer vehicles on the road during rush hour and fewer traffic jams caused by poor driving habits or badly parked delivery vehicles. The robo-vehicles could be connected to city infrastructure like traffic lights to ensure a smoother traffic flow.

Ez-Pro is a development on Renault's ride-sharing Ez-Go concept, which was unveiled in March this year. Aiming to offer city-dwellers an alternative to public transport, the Ez-Go functions as both a car and an Uber-style ride-sharing service.

Renault is presenting the concept at the International Motor Show for commercial vehicles in Hanover, Germany, this week.

This week also saw IKEA's innovation lab Space10 explore the potential of autonomous vehicles to take on new uses, with seven concepts that include a mobile cafe and a farm on wheels.