Bjarke Ingels' firm has completed Dortheavej Residence, an affordable housing development in Copenhagen made up of prefabricated modules stacked on top of one another.

It creates 66 new homes for low-income residents ranging between 60 to 115 square metres in area. Each one has 3.5-metre-high ceilings, full-height windows and south-facing balconies.

The building takes the form of a "winding wall", designed by the architects to resemble a chequerboard.

The southern side of the apartments are fronted with floor-to-ceiling glazing and alternating balconies, while the northern facade is designed to look like a pattern of solid and void.

The curve of the building creates a natural entrance plaza facing the street. At its base, a trio of large openings – each the size of one prefab module –create passageways through to a large secluded garden beyond. 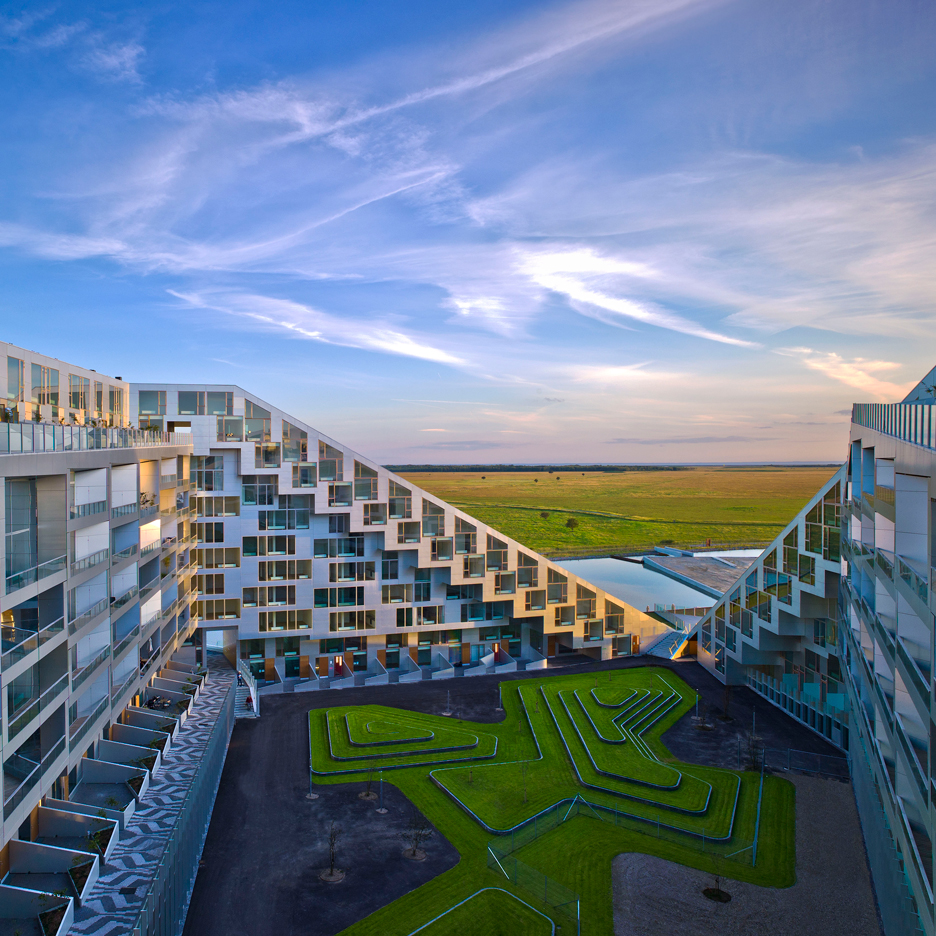 "The characteristic chequered pattern of Dortheavej is based on a singular prefab structure," explained BIG, which has its main office in Copenhagen, as well as studios in New York and London.

"Conceived as a porous wall, the building gently curves in the centre, creating space for a public plaza towards the street on the south side and an intimate green courtyard towards north," it continued.

"On the street level, the building opens up to allow the residents and general public to pass seamlessly into the courtyard."

Dortheavej Residence is located in northwest Copenhagen, in area that BIG describes as being characterised by industrial buildings from the 1930s, 40s and 50s.

To fit in, BIG chose a simple materials palette of light wood and unfinished concrete.

"On the sunny south side, balconies retract and add depth to the facade while on the northern side, the facade is even," said BIG.

"Long wooden planks cover the facade on all sides, highlighting the modules and alternating to accentuate the chequered pattern."

Bjarke Ingels ranked at number four on the last Dezeen Hot List. His studio has completed a variety of housing projects, ranging from the celebrated 8 House with its sloping walkways, to the huge triangular VIA 57 West tower in New York.

The firm has already been given the Lille Arne Award for Dortheavej Residence. The prize, awarded by the Danish Association of Architects, recognises exceptional housing projects.