A counter covered in Max Lamb's colourful man-made marble provides the focal point of this cafe and bookshop in Hamilton, Canada.

Synonym is a vegetarian and vegan eatery, a coffee shop, a bar and a bookshop located in Hamilton – a small city one hour southwest of Toronto.

Owners Sid Singh and Ayisha Izmeth worked with Montreal-based architecture studio Atelier Barda to design the 73-square-metre space, which dates back to 1895 and was formerly an art gallery.

"The project's objective was to create a space that was inherently social to emphasise the utility of a neighbourhood cafe,"  said Atelier Barda and Synonym in a project description. "Soft lines, cosy corners and a focus on lighting have helped create an inviting space that encourages conversation and community."

The overhaul involved stripping back black plaster covering the walls to expose existing brickwork underneath. This was then painted white to brighten the interiors, along with wooden floors and ample natural light that enters from two large storefront windows.

"The focus around the project was uncovering the bones of the space and exposing the scars it developed over the 130 years of standing on James Street North," said the team.

Complementing these muted tones is the exterior trim, which is coated in an ash-coloured Belgian paint that cafe owner Singh chose from Mjölk store. Located in Toronto, the shop represents work by designers and artisans from Scandinavia and Japan.

Singh also worked with the shop to source all of Synonym's lighting, accessories and furnishings.

"White-washed brick walls, muted palette, natural materials like mineral paint, plaster, wood and stone make up the space to draw attention and pay homage to the building's history, while creating a refreshing respite from the more industrial design of the city," the team added.

The cafe includes a host of custom furniture, including a bar formed by two rounded, L-shaped volumes. "Atelier Barda helped with the layout and the idea of infusing curves into the space," Synonym owner Singh told Dezeen. 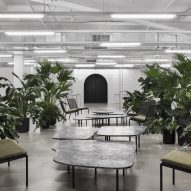 The bar is topped with a colourful terrazzo-like material by British designer Max Lamb. Called Marmoreal 157 and launched in 2014, the material comprises engineered marble with three different chunks of Italian marble in red, ochre-yellow and intense green hues.

There are also a variety of seating nooks in the cafe, including built-in benches at the front windows and a wood banquette to make the most of the narrow space. All of the built-in seating and tables were made by local woodworker Craig Lea.

"Each part of the space subtly transitions from one to the other, and draws in soft natural light," said the description.

Among the decor is a set of black lamps custom-made by Toronto shop Eclectic Revival and a series of chunky, wood T-chairs by Finnish designer Olavi Hänninen.

Further within the cafe is a communal dining area with a Trestle table by Danish firm Frama and birchwood chair by Finnish modernist Alvar Alto, titled 66 and 69. At the rear is another nook with drawings and photographs almost completely covering the walls, to help make the room more intimate and colourful.

A variety of lights also feature at Synonym. A tubular Eiffel lamp by Frama hangs above the middle dining table. At the bar is a Cestita table lamp by Spanish designer Miguel Milá, made in 1962, and four bulbous Fluid pendant lamps by Swedish studio Claesson Koivisto Rune.

A collection of homey finishes complete the project, such as a built-in magazine rack with wood shelves, potted plants and vases, framed art on the walls. Shelves for storing wine bottles were built by Toronto woodworker Jeremy Joo.

Atelier Barda was founded by Cécile Combelle and Antonio Di Bacco. It has completed a host of interiors in Montreal, including an office for a fashion company with steely interiors and foliage and a renovated house with soft pink and cream interiors.

Photography is by Brandon Titaro.