Nike has revealed the new home and away football kits for 14 national teams ahead of this year's FIFA Women's World Cup in France.

The US, Australian, Canadian, English, French, Chinese, South African, Chilean, Dutch, South Korean, Nigerian, Brazilian, New Zealand and Norweigan kits were unveiled at a global event in Paris on 11 March, where representatives from each team were on-hand to model the pieces.

It is the first time since Nike began working with the Women's World Cup in 1995 that each kit has been designed especially for the women's teams, rather than as derivations of the uniforms made for men.

"We believe this summer can be another turning point for the growth of women's football," said Nike president and CEO Mark Parker.

"Our bigger ambition is for that energy and participation to extend into all sports. Nike's commitment is to continue our leading support of competitive athletes, invest in the next generation at the grassroots level and deliver more innovative and compelling product design for women," he explained.

Among the 14 team kits unveiled at the Palais Brongniart, Nike presented England's home and away kits for The Lionesses, inspired by the English Football Association's aesthetic.

Accordingly, the brand took the traditional white kit and accentuated it with dark red cuffs. "The flood-white look gives an aura of strength and purity. This minimalism translates as sophistication and confidence — perfect for this team," said Cassie Looker, Nike Women's football apparel lead.

The away kit is completely dark red with faint patterns of flora native to England, including poppy and primrose.

The US women's national soccer team collection features an all-white home kit that is designed to channel the energy of 1999, the year the US hosted and won the tournament.

The kit has a striped sleeve cuff, intended to evoke the uniforms worn in 1999 team and "all its championship glory", and is punctuated with three stars above the crest to represent the team's three World Cup wins in 1991, 1999 and 2015.

A back panel on the home shirt also includes a tonal grey print of the 50 states. For the away kit, the US team will wear a red shirt and shorts with blue socks, meant as an abstraction of the American flag.

Also following an "exuberant" 1990s-inspired theme is the Australian home kit, which is based on street art found in Melbourne's well-recognised Hosier Lane and features splashes of forest green, white and mustard.

"The famed Golden Wattle and its sickle-shaped stalks and macro and micro shots of the Australian landscape all coalesce in the graphic — one that serves to encapsulate contemporary Australia," said Nike. Inside the kit are the words "never say die", a common rallying cry among the team members.

For the French team, who are hosting this year's championships, Nike chose a traditional blue shirt with rose gold detailing for the home matches, with a small Tricolore emblem on the sleeve.

A white shirt and blue shorts make up the away kit, which includes a hexagon pattern dotted across the shirt. 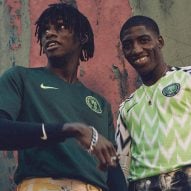 Canada's all-red home kit is inspired by the country's national symbol, the maple leaf, while the away kit is all-white.

"The maple leaf first blooms red in the spring and turns red again in the autumn. This reflects the combination of the team's new and veteran players," said Nike.

The Swedish kit is printed with the faces of female role models chosen by the team and incorporated into the numbers on the back of each jersey.

Elsewhere, South Korea, Chile, Nigeria and South Africa requested that their kits feature the same designs that the men's teams wore in the 2018 World Cup.

In Nike's bid to be the "world's most sustainable sports brand", each national kit in the series is made of 12 recycled plastic bottles.

The Women's World Cup 2019 is taking place between 7 June and 7 July. It follows last year's FIFA World Cup 2018 where Nike designed kits for several of the teams.