Reykjavík design studio At10 has created a bioplastic meat packaging made out of the skin of the animal itself to reduce waste surrounding meat consumption.

Called Bioplastic Skin, the packaging for hot dogs and ham slices is transparent and has a similar texture to plastic.

It is made by boiling animal skins in water, a process that releases collagen and gelatin to create a gel-like substance that "can be moulded into any shape desired" before hardening.

Presented at Design March, which took place in Reykjavík between 28 and 31 March, the project urges consumers to "rethink" their relationship to meat by incorporating the entire animal in the consumption process, not just the edible parts.

"Eating meat is a huge responsibility. We have become so detached from the life behind the product that is offered to us in stores, cut in perfect proportions and wrapped in plastic," said the studio.

"Animal hides are often considered to be a byproduct in the meat industry and if we make the choice to consume meat, it is our responsibility to utilise the whole animal, and do it with as little pollution to our planet as possible," explained the studio.

The biodegradable packaging also poses an alternative to single-use, plastic wrapping, which has a damaging effect on the environment.

"Every day big quantities of plastic packaging are thrown away that eventually end up in a landfill or in the ocean," said At10.

As well as providing an eco-friendly substitute for plastic wrapping, the design studio hopes that its unconventional packaging will provoke discussion and debate amongst meat-eaters. 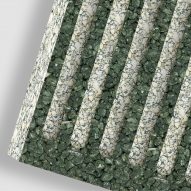 "By defying the way we present meat to the consumer, and use Bioplastic Skin instead of a polluting plastic, we hope to open a platform for discussion and debate," explained the studio.

"This material should not come across as unsavoury or repellent in any way, on the contrary, the hope is that people can appreciate the poetic gesture of putting an animal back into its skin and serving it that way to people," continued the studio.

In a similar attempt to reduce the impact of plastic packaging on the environment, Guatemalan designer Elena Amato created sustainable cosmetics packaging from sheets of bacterial cellulose.