Compass Pools has unveiled a concept for a four-sided infinity pool atop a London skyscraper, accessed via a submarine-style door.

Called Infinity London, the project is described by the swimming pool manufacturer as "only building in the world to incorporate a 360-degree infinity pool".

The pool is imagined atop a 220-metre-high, 55-storey skyscraper. Containing 600,000 litres of water, it would be surrounded by clear walls made from acrylic.

The bottom of the pool would also be transparent, so it could act as a skylight. At night it would be lit up with colour-changing lights.

With no sides or deck, swimmers would have to enter the pool through a custom-designed hatch in the pool bottom.

"We faced some quite major technical challenges to this building, the biggest one being how to actually get into the pool," said Alex Kemsley, founder and technical director of Compass Pools. 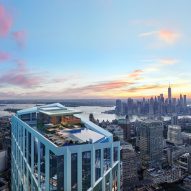 "Normally a simple ladder would suffice, but we didn't want stairs on the outside of the building or in the pool as it would spoil the view – and obviously you don't want 600,000 litres of water draining through the building either," he added.

"The solution is based on the door of a submarine, coupled with a rotating spiral staircase which rises from the pool floor when someone wants to get in or out – the absolute cutting edge of swimming pool and building design and a little bit James Bond to boot!"

Other technology would include an anemometer to monitor the windspeed, which would connect to a computer-controlled building management system.

This system would keep the pool at the right temperature and mitigate the risks of pool-water slopping into the streets below.

To make Infinity London more sustainable, hot air created by the building's air conditioning system would be recycled to heat the pool using a heat exchanger.

The plan for Infinity London is for a five-star hotel to occupy the top floors of the tower, with the pool available for guests to use. However, a location for the project has not yet been confirmed.

Similarly in New York, Kohn Pederson Fox is building a tower that will feature the "highest residential infinity pool in the western hemisphere" on its roof, and a skyscraper in Honolulu with a glass-bottomed pool that extends from its seventh floor.