The designs were presented at the University of Westminster's Menswear MA 2019 graduate show.

The collection was informed by Kim's interest in Sigmund Freud's studies of psychosexual development.

His collection aims to pair seemingly contrasting ideas such as children and adults, playfulness and seriousness, and clumsiness and sophistication.

"I like to juxtapose different things in one collection – things that seem very dissimilar to each other but actually are closely connected," said the designer. "Freud's theory is also similar to this. I wanted to visualise this in my collection."

"The main point of the theory is that children's behaviour consists of a repetition of pleasing behaviour, and this performance reappears in adult's sexual behaviours," he added.

"I needed a medium that would allow me to combine this idea of a child's playfulness and an adult's fetish, and I thought making balloon-like garments that reference an inflatable fetish was the most effective way to show both characteristics."

After researching "inflatable fetishes", the fashion student discovered that many people enjoy wearing latex inflatable garments. Rather than using latex however, which carries sexual connotations, Kim wanted to find a more "honest" and "naive" material.

He cut coloured bin bags purchased from eBay into different shapes and taped them together to make each of the inflatable garments.

While the inflatable pieces can be viewed as crude, the designer explained, parts of the outfits have been made from denim produced on a Japanese selvedge loom, that has been praised for its high quality.

By pairing bin bags with "sophisticated" denim products, Kim wanted to continue his theme of juxtaposing contrasting images, both visually as well as conceptually.

In a bid to also make the garments as sustainable as possible, he made the jeans from a squared pattern to minimise the amount of waste during production.

The collection also takes design cues from the sculptural works of American artist Paul McCarthy. Particularly his Tree sculpture – a controversial 24-metre high inflatable green structure that was likened to a butt plug. 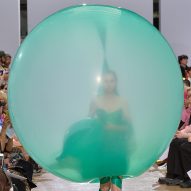 One of the looks in the collection mimics the shape of McCarthy's Tree sculpture, with a hole cut out of the front to allow the wearer to see through to the other side.

The bold colour scheme for the collection was also art-inspired, based on the sexually-charged paintings of British pop artist Allen Jones.

When asked about the growing trend for inflatable fashion, Kim answered: "Many designers have begun to question the physical standards that have long been stereotyped in fashion."

"Showing it on the runway against highly formalised physical standards can be their challenge and a question in an effort to break down the diminutive frame," he added.

Some of the colourful balloons were deflated by the models as they reached the end of the runway, transforming into bulbous dresses and skirts as they released the air through a valve and dived out of the top of the balloon.