Architecture studio Wallgren Arkitekter and Swedish construction company BOX Bygg have created a parametric design tool called Finch, which can generate floor plans adapted to the constraints of a site.

The tool is designed to help architects understand the constraints and potential of a site in the early stages of the design process.

Finch will be launched in 2020 as a plug-in to visual programming tool Grasshopper within 3D computer graphics software Rhino.

"The idea of Finch is to create a more user-friendly tool for architects to be able to enjoy the benefits of parametric design without any knowledge of Grasshopper or coding," Pamela Wallgren, co-founder of Wallgren Arkitekter told Dezeen.

The parametric design tool, which is currently under development, uses data inputted into it on the size of the building and local planning regulations to create an optimum internal plans either in two or three dimensions.

"It generates plans based on a set of rules designed by an architect to make sure the space works satisfactory," added Wallgren. 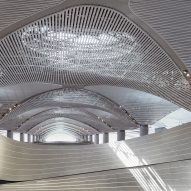 Wallgren Arkitekter and BOX Bygg are intending to improve the tool this year, before it is officially launched, by adding more parameters so that it can generate plans that take into account the orientation of buildings and their style.

"At our office we use it to leverage our designs," said Wallgren. "By minimising tedious and repetitive tasks we free up time for design work."

Parametric design is increasing being used by architecture studios to create interesting forms that would not have been possible using traditional techniques.

Earlier this year Softroom created the "world's-longest" parametric wall inside Istanbul Airport, while RAU Architects and Ro&Ad Architects used parametric tools to determine the best shape for openings in an egg-shaped observatory.