Traditional Danish seaweed thatching could be updated into a sustainable contemporary building material, according to research by Kathryn Larsen.

Copenhagen School of Business and Design student Larsen became interested in the potential for seaweed architecture after studying the Viking practice of thatching roofs using eelgrass on the island of Læsø.

"Eelgrass is a fantastic material that is naturally fireproof, rot resistant, carbon negative and becomes entirely waterproof after about a year," said Larsen. "It also insulates comparably with rockwool [a common type of insulation]."

"Plants grow in it, giving the effect of a green roof. It is a material that we should be considering seriously in an era of climate change."

A student of the Material Design Lab at the Copenhagen School of Business and Design (KEA), Larsen went on to test what a contemporary iteration of seaweed thatching might look like.

She tried different binders and grid spacing, eventually developing a set of prefabricated eelgrass-thatched panels to suit roofs or facades. Colloquially known as a seaweed but actually a type of seagrass, eelgrass is common across the UK and Scandinavia.

Larsen notes that while eelgrass levels are diminishing, there would be enough to supply a Danish construction industry, and that there are ways to farm and harvest the plant without harming the marine ecosystem. 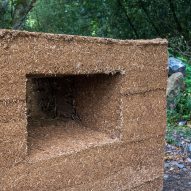 She drew on the results of a 2013 project, The Modern Seaweed House, built on Læsø by architecture studio Vandkunsten and non-profit organisation Realdania Byg.

In contrast to the vernacular buildings on the island, where the seaweed is stacked into shaggy roofs about a metre thick, the Modern Seaweed House has a slimmed-down look, achieved by stuffing the eelgrass into net pillows around the facade.

She also built on the work of Copenhagen architects Studio Seagrass, who have made innovative use of eelgrass in interior design and other areas.

Larsen's eelgrass panels are now eight months into a one-year testing period on the KEA roof. At this point Larsen says they are "almost entirely intact" and beginning to grow moss.

The architectural technologist has secured funding to continue her research into seaweed thatching and build more prototypes in the year to come.

"I hope to test the panels u-values, to see what insulation properties they can bring to construction," said Larsen of her future plans.