Called [AR]T, the AR experiences will feature works by seven artists chosen by the contemporary art museum, that will pop up across London, San Francisco, New York, Paris, Hong Kong and Tokyo.

Offered to the public for free from Apple stores across the globe, the virtual artworks will appear from 10 August 2019.

In the various works, large alien-like creatures can be spotted dancing atop city buildings, and portals offer a glimpse into alternative, sketch-style worlds with no perspective.

Groups of ten people will each be given an iPhone with the [AR]T app and a set of headphones, before being led by an Apple team member around each city.

During the sessions, which will last around five to 10 minutes, participants will encounter the six interactive artworks in famous public spaces like London's Trafalgar Square or New York's Grand Army Plaza in Central Park.

Viewers will also be able to take still and video imagery of the AI art pieces during their experiences.

"The New Museum has always led at the intersection of art and tech and we could not have asked for a better partner in Apple to support the fantastic visions of these pioneering artists," said Lisa Phillips, director of the New Museum.

"Augmented reality is a medium ripe for dynamic and visual storytelling that can extend an artist's practice beyond the studio or the gallery and into the urban fabric," she added.

Each artist has used AR to reimagine or invent new ways to express core themes of their art practice. 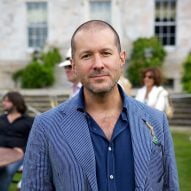 Djurberg and Berg's work, titled This Is It, introduces viewers to digital fairy-tale worlds by revealing magical creatures inside hollowed out trees, while Giorno's Now at the Dawn of My Life sees inspirational phrases float around in the air.

Other pieces include Rist's International Liquid Finger Prayer, which invites participants to chase after a multicoloured, shimmering form that hurtles through the city landscapes.

This interactive walk is just one of three different sessions users can choose from.

Participants can also receive a 90-minute in-store [AR]T Lab that teaches them the basics of creating AR using Swift Playgrounds – an app that helps teach people to code.

Alternatively, visitors can go into any Apple store worldwide to experience an AR art installation.

"Today at Apple offers a window into the creative arts made possible by our products and customers," said Apple's senior vice president of retail and people, Deirdre O'Brien.

The launch of Apple's AR experiences comes just a month after chief design officer Jony Ive announced his departure from the company.

The exit will come into fruition later this year as the British-born designer plans to start an independent design company called LoveFrom.