TU Delft student Sander van den Berg has invented a 3D-printed robotic fish that swims through water at a record-breaking 0.85 metres per second.

The Industrial Design Engineering masters student created the high-speed underwater drone as his graduate project from the Delft University of Technology.

Van den Berg claims the speed of 0.85 metres a second is faster than any previously designed robotic fish, such as MIT's SoFi.

The robotic fish is bright orange, like the clown fish from Finding Nemo. The key to fast speed is the two-part tail design: one part active, one part passive.

Van den Berg used computer modelling to optimise the design of these two parts so they would work in symbiosis to mimic the fluent S-shaped tail motion of thunniform swimming — the movement style of the ocean's fastest fish, such as tuna.

His model helps to overcome some of the challenges of designing a robot with this type of locomotion, where the oscillation throws off the object's stability, causing it to sway and roll.

A motor situated in the fish's head pulls the tail's jointed active segment from side to side.

The resulting forward motion is amplified by the adjoining passive segment of the tail, which continues the flapping motion and bends with the resistance of the surrounding water.

Engineers have made many similar prototypes in recent years in the knowledge that flapping devices have several advantages over conventional propellers.

The undulating motion is more efficient, faster and safer than propellers, because they avoid the potential harm to real fish or human handlers who come into contact with the drones.

This method also stealthier, with no whirring noise that could disturb wildlife. It also is effective at depth, whereas external rotating parts start to lose power.

Van den Berg calculates that his robo-fish, which is designed to be remotely operated, is 100 per cent more efficient than conventional propeller-based underwater drones. It runs on a single motor.

Van den Berg's supervisors at TU Delft were Zoltán Rusák, Jun Wu and Rob Scharff.  Scharff himseld is the designer of a soft robotic limb that can responsively shake hands with people. 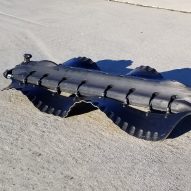