The Gatti House extension replaces a conservatory that used to be attached to the house, which sits at the edge of the South Downs National Park.

The extension abuts the southeastern corner of the original 18th-century structure, where it forms a new dining area connecting the existing kitchen and a snug.

Directly abutting the historic brick walls of the vicarage, the new corner room opens to the garden.

Gatti House's extension is differentiated from the brick house with metal cladding and glazing for the more prominent ground floor space, and timber cladding on the smaller upper level.

"The proposal, although contemporary in form, blends in harmoniously with the surroundings and respect the old vicarage's character," explained the practice.

Split across two levels, which roughly match the proportions of the original building, the dining area sits at the ground floor of the extension.

A new ensuite bathroom and dressing room sits on the first floor.

The dining space overlooks the garden with a large corner window, which opens out onto a large terrace raised on a low, brick podium. 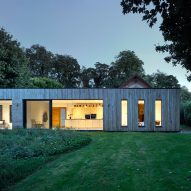 As well as flooding the dining room with light, this large window maximises views out from the house across the garden. Above, thin, full-height windows help to illuminate the bathroom.

"With both a south and east facing garden, it was important to maximise the natural light into the new spaces to negate any dark zones," said the practice.

Where it connects internally to the existing home, an oversized opening has been made directly through to the kitchen, along with two full-height doors into the snug, creating an improved flow through the ground floor of the building.

Recent projects include a timber-clad extension to a barn in Hampshire, and an extension in Winchester that is suspended above a driveway.