The picture was shot in the company's Apple Park headquarters, which Ive designed in collaboration with Foster + Partners, and is now a part of the museum's permanent collection.

He is pictured on the building's controversial, ring-shaped facade, dressed almost entirely in white and wearing an orange Apple Watch.

"It was fascinating to take photographs in the new Apple HQ, a place that plays such a historically crucial role in our present and future," said Gursky.

"And above all, it was inspiring to work with Jonathan Ive within this setting. It was he who found the form for the technological revolution that was initiated by Apple and his aesthetic has left a mark on an entire generation," he continued.

"I admire his immense visionary power and have tried to express this energy in my portrait."

Since joining Apple in 1992, Ive has presided over some of the company's most seminal designs, including the iMac, iPod and iPhone.

With more than 5,000 patents to his name, he was knighted in 2013 for services to design and enterprise.

After nearly 30 years, Ive has announced that he is leaving the company at the end of this year. Although he will continue to work with Apple, his main focus will be on establishing his own design company LoveFrom. 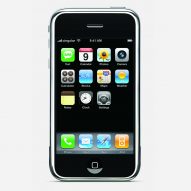 Ive has described the process of taking the portrait, and the collaboration with Gursky, as a sort of meeting of minds.

"I have been obsessed with Andreas' work for a couple of decades and vividly remember the thrill of our first meeting seven years ago," he explained.

"His very particular and objective presentation of what he sees, whether voluminous landscapes or the rhythm and repetition of supermarket shelving is both beautiful and provocative. Mindful that he rarely makes portraits, this is a conspicuous and particular honour for me."

The photograph is the second in a series of portraits depicting contemporary icons, which was commissioned for the gallery by the Outset Contemporary Art Fund.