Baumann, whose work is one of 40 visions for the future of architecture currently on display at the Royal Academy of Arts in London, warned that plants on buildings are often a distraction from a development's less eco-friendly qualities.

"Greenery is unfortunately too often used as an alibi for new developments, by wrapping buildings in green as sole legitimisation of an otherwise unsustainable project," Baumann told Dezeen.

"Green surfaces such as walls and roofs are often very high maintenance and demands a lot of water and chemicals to thrive."

Many new developments are incorporating vertical forests, green roofs, urban farms and living walls. But unless these are deployed properly and sensitively, she said, they give little benefit – or are even actively harmful.

"Greenery is not per se ecological, and the commodification of nature can lead in fact to reduced biodiversity and higher pollution levels," said Baumann.

Ten years ago a London council was accused of wasting £100,000 on the UK's first living wall when all the plants died. The structure was designed to replace the parkland that was lost when a children's centre was built on the site, but within three years it was brown and withered.

Since then may new developments have featured green walls and roofs, as cities strive to address high levels of pollution and risks of flooding with sustainable architecture.

This trend for plant-covered buildings is ultimately positive, said Baumann.

"There's a greater awareness today on the positive impact of plants in our urban environment in term of improving air quality, reducing pollution, creating cooling island, promoting biodiversity and fostering citizen's physical and mental health," she said. "This is very encouraging."

Landscape architects must be given a bigger role

To make sure greenery is used in the right way, planting experts need to be involved in a much more significant way, not just as window dressing.

"Landscape architects today can be radical only if they are given a bigger role in city planning and new developments," said Baumann. "Their understanding of open spaces as well as of natural processes is crucial to allow the creation of more inclusive, liveable, and truly sustainable cities."

Baumann's peice exploring the queer lives of plants and their potential for imagining a post-anthropocene landscape is part of an exhibition at the Royal Academy of Arts, called What is radical today?

Curated by Gonzalo Herrero Delicado, it is a display of 40 radical projects from architects including Peter Cook, Denise Scott Brown and Dezeen columnist Sam Jacob. 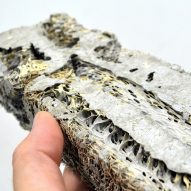 Parliament of Plants is Baumann's adaption of the 18th century painting by Karl Anton Hickel, which depicts a cast of white male politicians sitting in the UK House of Commons. Instead of people, each portrait has been replaced by a plant.

"It was painted at a time when imperial powers sponsored colonial expeditions that supported scientific exploration, imperial conquests, and global trade," said Baumann.

"Palms, bamboos, arums, rubber trees, and cactuses ranked prominently among the motivations for voyages of discovery, together with costly spices, medicinal herbs, and cash crops."

Her piece asks how the world could have been different if "the vegetable world had taken power" at this point in history.

"Would they be better at tackling issues of races, gender, normativity, inclusivity, ecology and climate change than we are?" Baumann asked.

Plants offer a radical alternative vision for living in the future, argues the landscape architect, because they are inherently queer – in the sexual and gender minority sense.

"Some plants are unisexual and possess either male or female attributes on a single tree, like the yew or the gingko. Others contain both male and female inflorescences on the same plant: the spruce or the birch tree for example," said Baumann.

"Others are multi-gendered: the wild carrot is both male and hermaphroditic. Some specimens are transitionally transgender: going from one sex to the other, like in the case of the field maple. Such a range of possibilities can be framed as queer."

"We are suffering from plant blindness"

It is these queer attributes that make plants uniquely adaptable to different soils and climates, or able to foil would-be predators.

Humanity needs to open their eyes to the alternative modes of being to plan for ways of living once we have moved beyond the anthropocene, suggested Baumann. For the first time in history, humans have become the major force impacting the planet's climate and environment.

"We are suffering from plant blindness," she said.

"We don't really see nature around us, having lost touch with the plant world within our urban environment. Trees, shrubs, flowers, and herbs can though be a great source of inspiration, by providing alternatives to the way we design and act. In a post-anthropocene era, flora would be given a voice and be respected."

Main image is by Projekt_Kaffeebart via Pixabay.