Icelandic singer Björk worked with creatives from the theatre world who tore up the rule book to create a "delicate" set for her Cornucopia tour.

Björk has been touring her Cornucopia show in North America and Europe since May this year. It kicked off at The Shed in New York designed by Diller Scofidio + Renfro, with the final show taking place in Stockholm this Sunday.

The set was created by designer Chiara Stephenson who has previously designed shows for Wyndham's Theatre and The Globe in London, as well as stages around the UK.

Stephenson thinks her background in theatre allows her to add "a sensitivity or a bit of a held atmosphere" to the sets she creates, something which she believes is unusual for a large-scale musical concerts.

"[Music shows] can often feel quite brutal and engineered, quite chunky and robust," explained Stephenson. "I think our constant aim with this show was to make something that felt more delicate and a bit more fragile in a way."

She told Dezeen that the multi-platform set allowed musicians to perform in a more creative way rather than from one marked spot.

"There's this very eclectic group of musicians who we wanted to present and celebrate individually, but also collectively," explained Stephenson. "So we started to think about these platforms at different levels."

A network of steps between each level allowed for "acute moments on certain platforms with just a few musicians".

Performers could then travel across the different platforms and surprise the audience by appearing on different parts of the stage during the show.

The nature of concert staging is often limited by the fact that it has to be built at the venue in a day, bolted together and easily broken apart. Stephenson chose to create an intricate set for Cornucopia, closer to ones that you might find on theatre stage.

"I ignored the concert rule book, which resulted in something that's pretty strenuous from the practical side, but liberated from the rule book," said Stephenson.

"With theatre, often things are made without those limitations in mind."

A series of translucent threaded fabric curtains made from silver string were hung across the front of the stage to create a permeable barrier.

Unlike a solid fabric, the gauze-like semi-transparent curtain can be parted for the performers to move through it, allowing them to "weave between the layers" as they travel to different parts of the stage.

"A big thing that Bjork would always say is that at times she wanted to perform as if she was right whispering in the ear of each audience member but at other times be very distant and epic," said Stephenson.

"She is very introverted and shy as well as very extrovert, and very dramatic," she continued. "We had this idea to have layers that could both shroud her and give her privacy and also open up to reveal her."

This "set of veils" created "a bit of mystery in front and around her" whilst also providing a canvas for Tobias Gremmler's digital video art, which was projected both onto the curtain and the wall behind Björk and her musicians.

Each song had an accompanying video, with graphics ranging from mask-like versions of the musician's face suspended in the air to constantly shifting orchid-like anthropomorphic forms that swirl and contract. 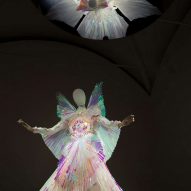 The curtain at the front of the stage was parted at the beginning of the show to give a wider, panoramic projection surface for the visuals in venues that were able to accommodate it, including The Shed.

Gremmler has a background in creating music for the stage before he switched to visual arts, whilst the show's lighting designer Bruno Poet has also worked across theatre, opera and dance.

Poet, who Stephenson describes as "a living legend in the theatre world" was in charge of illuminating the show: "He always brings with him that theatrical delicateness that often rock concerts lack."

For the Cornucopia show, Gremmler was commissioned to create the videos before the set design, costumes and lighting were decided.

"Adjusting the visual format to the stage was relatively easy," Gremmler told Dezeen. "It's something I do often for theatre and exhibition projects."

"I worked as a composer for theatre music before I switched to visual arts," he continued. "Thus, I perceive sound and vision as naturally interweaved and had enough experience to imagine how this can unfold itself in a theatrical concert show."

The necessarily collaborative nature of putting a piece of theatre or performance on stage was helpful in weaving the various elements of the show together.

"Working for theatre helped me to get a deeper understanding of all participating disciplines and how they affect each other," Gremmler explained.

"Each part has almost 100 per cent influence on the final result. A scene can shift its meaning to the opposite just by changing the music. The same power lies in set design, lighting and costumes."

Björk's music was Gremmler's main point of inspiration for nature-inspired digital animations. The influence extended into his process.

"I am using design principles that are very close to nature. It's like planting virtual seeds in the soil of a surface," explained Gremmler. "When the seeds sprout, they deform the surface, crack it, grow along it or develop new shapes."

"Although all the visuals where created digitally, I wanted them to look natural. It's like extending the concept of nature into the digital world."

The preoccupation with the natural world in Björk's music was something that was also consciously carried into Stephenson's set design, where she played with scale to create an otherworldly atmosphere.

"We began by looking at nature and at natural forms, and that thing of appreciating a tiny natural form and zooming in and looking at it so closely that the texture within it feels like epic landscapes in themselves," said Stephenson.

"Whether it's a piece of coral or an underground network of mycelium, the epicness of the macro of nature was something that we found quite interesting," she continued.

"Then trying to marry the scale of these 10-metre screens that we wanted to project Tobias' work on to, and thinking about the scale and form of the undercarriage underneath that, and about what scale would be appropriate and hold its own whether there was video production or not."

Stephenson began by exploring the physical 3D form of mushrooms, the patterns of their gills and the kind of landscapes they make by creating small-scale models, as she would when designing a theatre set.

The final platforms were constructed with the help of scenic set builder Richard Nuttbourne.

"A big thing for Björk is her love affair with nature and technology," she said. "It's a fusion, and the byproduct of those two things has been a massive interest to her. And obviously to us, because we wanted to do it justice."

In a time of climate crisis, the show also references the huge global challenges facing the natural world in the light of humans' devastating impact on the environment.

It does so both implicitly through its celebration of natural forms as "something beautiful and fragile" although "maybe more feminine in a way", as well as explicitly.

A video message from teenage climate activist Greta Thunberg was shown during the concert, imploring the audience to change the system itself if solutions can't be found within it.

"You say you love your children above all else, and yet you are stealing their future in front of their very eyes," Thunberg said in the video message.

"Until you start focusing on what needs to be done rather than what is politically possible, there is no hope. If the solutions in this system are so impossible to find, then maybe we should change the system itself."

Stephenson is now working on the design of the ballet Sleeping Beauty for Ballet Leipzig, and has used the technique of a macro exploration of the natural world for a "hairy" backdrop.

She believes that each project subconsciously informs the next: "Just as much as theatre informed the decisions that were made for the designs for the Bjork show, being part of that Bjork show has informed the ballet."