This year marked 100 years since the Bauhaus was founded. To celebrate the occasion we've selected 10 designs related to the school that would be ideal gifts.

Textile artist Gunta Stölzl studied and taught at the Bauhaus, and a blanket she made and used while there has been recreated by British studio Wallace Sewell.

The dormitory blanket has a rectangular gridwork of dark and light shades – a concept that featured prominently in Stölzl's creations.

All Seasons by Thonet

German brand Thonet has reproduced tubular steel chairs from the Bauhaus era with weather-resistant coating and mesh seats for using outside.

German designer and artist Marianne Brandt created this stainless steel ashtray with a cigarette rest and removable lid in 1924, under the supervision of Lazlo Moholy-Nagy at the Bauhaus' metal workshop.

Archive Editions by COS

Swedish clothing company COS, part of H&M, has launched a capsule collection inspired by clothes that students wore at the Bauhaus in the 1920s and 30s.

Bauhausmädels, or Bauhaus Gals in English, is a photography book published by Taschen that celebrates the work by women at the Bauhaus, whose specialties included metalwork, photography and textiles.

For years almost all attention was given to the leading men of the Bauhaus, but this book forms part of a movement that has sprung up to give its female students much-earned recognition.

German silversmith Christian Dell worked at the Bauhaus metal workshop in Weimar from 1922 to 1925 and created this curvaceous yet minimal table lamp in 1936 for Kaiser Idell.

Called model 6631 or Luxus, the stainless steel is reproduced by Fritz Hansen. It has a turnable shade, while its height can be adjusted by a clamp at the base.

Lars Müller has reprinted journals from the Bauhaus school from 1926–1931, called Facsimile edition, in collaboration with the Bauhaus-Archiv Berlin.

For the first time, the writings are published in English, including 14 issues of the Bauhaus Journal, originally published by Walter Gropius and László Moholy-Nagy, and four volumes of the Bauhausbücher. Developments at the school, teaching methods and student projects are among the topics that are covered.

The Bauhaus Project by Designtex

A range of fabrics created by Stölzl and Anni Albers, including from their time spent at the Bauhaus school, are reproduced on a commercial scale by Designtex.

An adjustable lamp that was commonplace at the Bauhaus in Dessau, but which was virtually forgotten about, has been reproduced 100 years later by Germany light company Midgard.

Called TYP 113 or Steering Lamp, the fixture was designed by Curt Fischer, who was a close friend of Walter Gropius, leading to its use at the school's workshops and Masters' Houses.

British company MuralsWallpaper has launched a collection of wallpaper with large shapes and structures in geometric, colourful patterns.

Although not direct copies of Bauhaus designs, the murals feature muted red, blue and yellow compositions and are reinterpretations of graphics from the school. 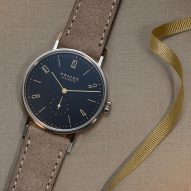