IKEA has sold a brutalist tower by Marcel Breuer in Connecticut to a local architect and developer, who plans to turn it into a zero net energy boutique hotel.

Becker intends to create a boutique hotel and conference centre that celebrates the design of the tower, which modernist architect and designer Breuer completed in 1970.

"It's such a wonderful sculptural building with great potential for reuse," Becker told Dezeen. "I had thought that it would have been reused by now."

"We're looking to develop this building that really celebrates the heritage of the Bauhaus, but also meet this growing need in the marketplace for meeting and hospitality spaces."

Becker, who studied architecture at Yale University in New Haven, intends to make the hotel zero net energy – meaning that the amount of energy used would equal that created on-site. He intends the hotel be "all-electric" and the first in the US certified with low-energy design standard, Passivhaus.

"We're planning to generate all the energy on-site by using photovoltaics on the rooftop and also solar canopies in the parking areas," he said.

Breuer completed the brutalist concrete building to provide the US headquarters of Armstrong Rubber Co. In 1998, Italian company Pirelli purchased Armstrong Rubber, giving the building its name, but sold it shortly after.

The adaptive reuse project will maintain the exterior of the top-heaving building, which is separated into a two-storey portion at ground level and the four-level section above. The top structure is held up by three large concrete volumes and slender pillars.

Changes to the structure will be mostly internal, but Becker plans to create new meeting spaces and conference room on the top storey where there is a 16-foot-high (4.9-metre-high) penthouse space.

"Breuer originally designed five stories in the upper portion but it turns out that the Armstrong Rubber Company didn't really need that much office space," he said.

IKEA purchased the vacant structure in 2003 and built one of its large furniture outlets on the site adjacent. It then received permission to convert the building into a hotel from New Haven's City Plan Commission in November 2018. The company has been in talks with Becker since according to the New Haven Independent.

"I've had my eye on this ever since I was a student at the Yale School of Architecture back in the 1980s, but it's been abandoned and has really been neglected," said Becker.

"Only because of my fascination with it, I started about two years ago to put together a plan to redevelop it into a hotel, which I was fortunate to persuade IKEA to embrace." 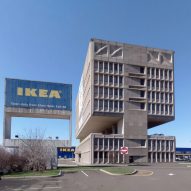 Breuer was born in Hungary and studied at the Bauhaus school, before moving to the US to practice design and architecture. He has completed a number of projects in the brutalist style – an architectural movement that was popular in the 1960s and 1970s and has seen a surge in interest in recent years.

Other works by Breuer include a Connecticut house he built for himself that was renovated by Toshiko Mori in 2016. He also designed the former Whitney Museum in New York that was borrowed by the city's Metropolitan Museum of Art, and reopened in 2016 as an exhibition space named after the architect.

Photography is by Bruce Becker.