Swedish company Minut has created a smart-home security device for the camera-averse — an alarm that monitors movement, noise, temperature and humidity.

The company wanted to create a comprehensive security device without using wi-fi-connected cameras, which are controversial but increasingly common thanks to product families like the Google-owned Nest and Amazon's Ring.

The wireless Minut alarm instead uses several sensors to track key risk-factors within the home.

A passive infrared motion-sensor detects the heat energy emitted by living things, and if the user activates the system, it alerts them via a smartphone app to any "motion events" that occur.

At the same time, other sensors monitor the decibel level, temperature and humidity. The last two inputs combine to track mould risk, while any individual spikes might indicate flooding, an open window or that someone has left the oven on.

The company aims to appeal to people who are interested in privacy as much as security, promising on its website that it's "never listening or watching".

"There are a few problems that we identified with using cameras for home security," Mattisson told Dezeen. "One of them is feeling like you're being watched, which automatically changes your behaviour and never really makes you feel at ease."

"While the home is important to protect, it's also the last place where we have privacy and even a split second of video can feel and be evasive."

Without video, Minut is also a less tantalising prospect for hackers, and because it uses edge computing to process data at the source rather than sending it back to the cloud, the information should be more secure.

It is also a suitable security option for people running short-term rentals — indeed, the company's initial product was an Airbnb monitor. 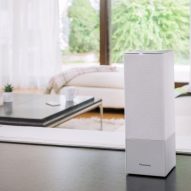 Apple, Google and Amazon unite to make all smart home products talk to each other

Mattisson worked in the Exploratory Design Group at Apple in California before returning to Sweden and co-founding Minut in 2014. He and his co-founders — Marcus Ljungblad, Martin Lööf and Fredrik Ahlberg — designed Minut entirely in-house.

They launched an early version of the alarm on Kickstarter, under the name Point, and Mattisson says the crowdfunding process has allowed the the company to improve and evolve the product.

"We have had close communication with our users for the iterative process and Minut has evolved with our customers," he said.

"We discovered that there were use-cases that weren't always part of our design plans but we listened carefully to what problems people had and adapted the product to solve these issues."

He considers the latest version of the product suitable for both individual customers and property managers with a portfolio of potentially hundreds of apartments.

Both the hardware and software are meant to be simple and accessible, even to non-tech-savvy users.

To install the device, they stick or screw a magnetic mounting plate to the ceiling. One alarm covers a "large room" of approximately 50 square metres, and the rechargeable battery lasts for approximately six months.

Minut currently works with Google Assistant globally and Amazon Alexa in the US, with Apple HomeKit compatibility in development. US users also have the option to integrate the device with Noonlight to auto alert emergency services.