Described by Abloh as being positioned somewhere between sculpture and useful object, each piece is formed from concrete and features a punctured surface.

As a "reflection of our generation", the designs have been spray-painted with the designer's brightly coloured free-hand markings, reminiscent of city graffiti in a bid to evoke "street culture".

The collection takes its name from efflorescence, which Abloh refers to as the "flower bomb effect", in which salt moves to the surface of a porous material to form a white coating.

Abloh suggested that this process would affect the furniture items if they were placed in an urban environment.

Each of the pieces are on display at Galerie Kreo's exhibition space in Paris, France, in what is the designer's first solo show in a gallery dedicated to contemporary design.

As a nod to brutalist architecture, all 20 pieces boast stark, monolithic shapes. The sloping surface of Bench 2 is based on the design of skate ramps, further alluding to the urban environment.

Galerie Kreo describes the object as "a Trojan Horse dedicated to the deconstruction of the generic and conversations on the here and now".

Also included in the series is a table with an oblong top and undulating, bubble-like base, a cubic seat emblazoned with graffitied letters, and a rectangular, steel mirror with cut-outs.

As Abloh explains in an Instagram post, the mirrors "relate to [his] reluctancy to ever 'judge a book by its cover', hence the same circular voids". 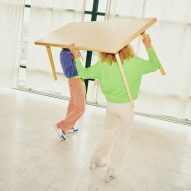 "To me, design always has the inherent idea of being a bridge from the past, with an eye towards the future," said the Off-White founder.

"In conclusion, architecting a language of adverting the norm that a purist and a tourist can both comprehend and use," he continued.

Abloh, who is also the artistic director of Menswear at Louis Vuitton, recently designed a furniture collection for IKEA, which became available to buy in November 2019.

Aimed at students and young people moving into their first homes, the Markerad range comprises 15 items including bedding, furniture, rugs and a clock.