Chocolate manufacturer Barry Callebaut has set up a dedicated 3D-printing studio for desserts, providing chefs with an opportunity to create bespoke designs that can be reproduced at scale.

The Barry Callebaut Group's global decoration brand, Mona Lisa, is responsible for launching what the group described as "the world's first personalised 3D-printed chocolate at scale".

Chefs can develop their own intricate or unique creations in collaboration with Mona Lisa 3D Studio, which will reproduce them in the desired quantity using its advanced printing technologies.

"Mona Lisa 3D Studio enables you to wow your guests or customers with unseen chocolate experiences, and with innovative shapes and designs that were impossible to be produced before," said the brand.

"It is the first and only studio in the world where we 3D-print your creations or designs in real, delicious chocolate at scale," it added. "And where you can co-create with our design teams to explore new ideas, shapes and experiences."

The printing process was developed in response to increasing demand for more experiential dining, particularly among millennials.

The technology allows chefs to devise desserts that are more personalised or interactive, and therefore more likely to be shared on social media.

Dinara Kasko's sculptural cakes are carved from sheets of chocolate

When hot chocolate sauce is poured on top, the printed form opens up like a cacao flower.

"This new way of working with chocolate is going to take consumers by surprise," said Roca, "with previously unthinkable shapes produced at scale and with impressive precision."

"I'm usually inspired by the things I can't do as they represent a creative challenge," the chef added. "But now I can take my chocolate craftsmanship to the next level. I can imagine any new kind of design and it will come to life."

A team of designers at Mona Lisa 3D Studio will work with chefs and customers to develop personalised chocolate decorations through a process involving digital prototyping.

The approved designs can then be reproduced quickly and affordably at scale using the company's patented printing technology. The brand is initially targeting chefs, hotels, coffee chains and restaurants in specific European countries. 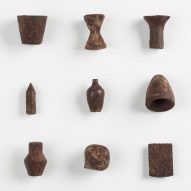 For the project's launch event, Roca also developed You, a personalised dessert with the name of the guest rendered in chocolate.

Roca's handwriting was digitised and translated into a ribbon-like printed form that became the centrepiece of the dessert.

Several other designers have experimented with printing chocolate and other foodstuffs in recent years.

As early as 2013, designer Janne Kyttanen told Dezeen that food would be "the next frontier" for 3D printing. He supported his claim with a series of prototypes for printed pasta, breakfast cereal and burgers.

Dutch design studio Michiel Cornelissen Ontwerp has developed a proposal for a chocolate printer that would produce objects sent to it through an app, while Italian bioengineer Giuseppe Scionti has 3D printed a vegan steak from plant-based proteins.