A patchwork of wood shingles and stone forms this Toronto home that local practice Batay-Csorba Architects has extended and renovated.

Located in Toronto's residential neighbourhood Baby Point, the two-storey house was built in the early 1900s with stones from the city's Humber river, stucco and wood. The homeowners sought to preserve the characteristics of the home, and enlisted Batay-Csorba Architects for the renovation.

The original house was a mixture of Arts and Crafts-style and Tudor Revival, as seen in the exterior details that Batay-Csorba Architects left intact.

When developer Robert Home Smith created the garden suburb of Baby Point in 1912, he had many of the homes designed in this aesthetic, the studio explained.

"The Baby Point district is currently under study as a heritage conservation district in Toronto," said the studio. "The clients for Baby Point Residence had an interest in the Arts and Crafts movement, and preserving neighbourhood character."

The team cut a large, double-height slice in the west side of the home and added a gabled roofline on the back facade that features ample glazing and views of the back garden's ravine.

The result is a home that has three pitched rooflines of similar proportions, two of which run alongside one another on the back facade and a third that cuts across them. The home's front facade showcases new windows, wood shingles and masonry.

In addition to building the extension, Batay-Csorba Architects renewed the existing home structurally, reorganised the layout by tearing down walls and refurbished the interiors. The team sought to understand the underlying principles of the Arts and Crafts movement to design the house.

"Beyond medieval motifs, ornamentation and nostalgia for hand craftsmanship, we also interpreted the Arts and Crafts movement spatially," the studio added.

The ground floor is centred around a built-in storage volume that provides a pantry and a coffee bar in the new kitchen, and a bar nook in the adjacent dining room. A living room and separate sitting area round out the main level. 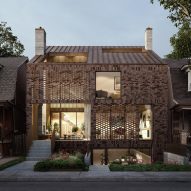 Custom furniture was built by local designer Heidi Earnshaw and includes a wood banquette in the kitchen whose aesthetic is designed to be reminiscent of the Arts and Crafts movement. Minimal, built-in cabinets in pale and dark wood feature throughout the home for added storage.

A stairwell with glass railings cuts through one of the home's pitched rooflines and accesses three bedrooms with ensuites. Measuring 5,200 square feet (483 square metres), Baby Point Residence is square-shaped in plan and is complete with a bedroom, living room, and two bathrooms in the basement.

Walls are white in sharp contrast to the existing stone fireplaces, and pale wood covers the floors.

The studio has designed several apartment complexes in Toronto, including a building with a brick screen exterior and two townhouses linked together, as well as Milky's coffee shop.