Architect Ludwig Godefroy has designed this fragmented concrete house, which spans an 80-metre-long site in Mérida, Mexico, to draw on Mayan traditions and culture.

The Mexico City architect completed the house in Mérida, the largest city in Yucatán state, which is regarded as the capital of the indigenous Mayan civilisation. The architect sought to reference designs from this ancient community across the project.

"How is it possible to build architecture that reflects and considers the Yucatán identity, to make this house belong to its territory? In other words, how could this house be Mayan?," Godefroy asked.

Working to his advantage was the unusual proportions of the site measuring eight metres wide and roughly the length of three-quarters of a football field.

This space allowed him to explore the concept of a long, fragmented residence that he said references a Sacbe, an ancient Mayan road system used to connect different communities.

"Those straight lines used to connect all together the different elements, temples, plazas, pyramids and cenotes of a Mayan city; sacred ways which could even go from one site to another along a few hundred kilometers," he explained.

Breaking up the residence and interspersing it with outdoor areas also formed a way to naturally ventilate the house.

This followed the Mayan architectural style developed to ease living in the extreme climate of Yucatán, such has high temperatures and a rainy season from June until September.

"This typology is basically based on natural crossed ventilation under high ceiling volumes, all connected together by a series of patios letting the airflow through the entire house, providing this way a natural cooling system," he added.

Construction and materials are locally sourced or reference Mayan culture as well. For example, creamy stone perimeter walls, which have joints covered in the stone splinters, take cues from those in Mayan pyramids and temples sites.

While not traditional, the exposed concrete that forms the main volumes of the house and the floors was produced in Mérida. This is then complemented by locally designed wooden louvres on the windows and the doors. 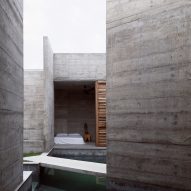 "The construction is reaching a 90 per cent made on site, with local materials and built exclusively by Yucatec masons and carpenters, a sort of modern reinterpretation of what could mean vernacular architecture," said Godefroy.

He added that the material choices are simple and intended to weather over time.

"Made of massive materials which do not require special treatments or maintenance, accepting ageing and time as part of the architecture process, the house has been conceptualised to end up one day covered by a new coat of materiality: a layer of patina."

The aesthetic is mirrored in simple decor such as wooden furnishings, a stone bathtub and a rough sink. Pops of colour are provided by blue-hued textiles and artwork that nod to the tones of the swimming pool.

Because of the urban location, Godefroy arranged the house to provide the residents with privacy.

He inverted the traditional arrangement of a property, moving the backyard garden to the front to act as a buffer to the street and the kitchen, living room and swimming pool towards the rear.

"Casa Mérida is inverting the classical scheme of the house with its garden, to create a singular habitable garden with its house," said the architect, who describes the result as "a sort of isolated countryside situation in the middle of an urban context".

Godefroy aimed to disconnect Casa Mérida by creating a closed-loop water system, starting by drilling a borehole to source water in the subsoil.

Absorption wells were added to collect rainwater. They are placed under sculptural water collectors that act as features of the house. Lastly, a biodigester treats the house's dirty water to use for the garden.

Casa Mérida has many similarities to a holiday home Godefroy completed in the Mexican state of Oaxaca. Called Zicatal, it featured monolithic concrete steps evocative of ancient Aztec temples and open-air living spaces and gardens.