Unparelld'arquitectes has turned four buttresses supporting a party wall in the town of Olot, Spain, into an arched public shelter that aims to "catalyse activity" on the street.

Olot-based architecture studio Unparelld'arquitectes built the arched shelter, named Emergency Scenery, to replace a house that was purchased by the city's government and demolished in 2017 to improve the area's street alignment.

The three arches, which are supported on four buttresses that were built to supporting the party wall of the remaining house, are intended to be  used as a shelter and performance backdrop to encourage activity on the street.

"Basically, it is a scenery to achieve a more comfortable atmosphere in the street, and catalyse activity," said Eduard Callís, co-founder of Unparelld'arquitectes.

"It also guarantees the waterproof qualities of the party wall," he told Dezeen. "The work of formal definition is based on completing the existing – buttresses and party walls – linking the new parts with the old ones, with the intention of configuring a unitary final structure."

The structure was created as an alternative to building new paving and protecting the party wall in a more traditional way.

"In the compact city, we think the facades take responsibility for giving shape and character to the street," said Callís. "This is the reason why we reformulated the initial assignment for a new pavement."

"It was necessary to invest the available budged in the vertical plane," he continued. "Instead of a waterproof metal cladding we conceived a porous facade, in order to offer a scenographic support to urban life and to accommodate events."

The trio of red-brick arches, which stand opposite the Baroque church of Our Lady of the Tura, were designed to be reminiscent of a section cut through a church.

"It evokes the section of a church, and at the same time and on a different scale, the typical chapels on the facades of the buildings of the old town," said Callís.

"It is also inspired with the work by Sadurni Brunet. He was a decorator, working in the neighbourhood, and specialised in designing sceneries, shops and mangers."

Unparelld'arquitectes also hoped to capture a sense of the domestic building that was demolished and the history of the local area.

"The project is also attentive to the reality, in the way that it completes the existing elements, as the buttresses and the traces of domestic activity marked on the party wall," explained Callís. 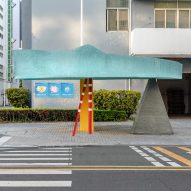 "It is a way of remembering that the city is built on its own stratum and gives rise to an agglomeration of past stories. Emergency Scenery is the construction of an unreal, symbolic history that highlights this public space," he continued.

"We played to change the perception of those elements that are present in the town. They are 'as found' elements with a change of meaning."

In several areas patterned glass panels designed by artist Quim Domene have been included within the the arches to recall the city's history of crafts, while on one transparent panel there is a list of old shops that used to exist in this part of Olot.

"The glass panels and the performances in the niches aim to recover the memory of the important role of crafts and commerce in the neighbourhood," said Callís.

"It is an intervention by the visual artist Quim Domene. From left to right, the glass panels reproduce an original design for a hydraulic floor by Sadurní Brunet, two printed fabric designs produced in the local textile industry in the 18th century and the pattern of an existing glass tile in the doctor's house."

Unparelld'arquitectes is an architecture studio based in Olot run by Callís and Guillem Moliner.

Photography is by Jose Hevia, unless stated.