Building startup Containerwerk has turned old shipping containers into 21 micro apartments for visitors to the town of Wertheim in Germany.

Called My Home, each apartment sits in a decommissioned shipping container. The containers have been arranged in groups of three and clad in timber.

Each apartment has 26 square metres of interior space, fitted with a kitchenette and a dining table along with a bed and television. A separate bathroom with a shower is built in to each container at the opposite end to the bed.

Full-height glazing at either end brings light into the open-plan micro apartments. The rooms are decorated with white walls, wooden furniture and grey upholstery.

The short stay housing development is aimed at business travellers and tourists looking for an alternative to a hotel stay.

Untreated local timber was selected for the cladding to create an "aesthetic overlap" with the surrounding trees and the "trendy" containers, said developer Nicolas de Fejer.

De Fejer, together with business partners Felix von Knobelsdorff and Clemens Müller, collaborated with Containerwerk to create a sustainability-led alternative to hotel accommodation.

"We all travel a lot on business and are fed up with the dark, stuffy corridors and restrictive rooms typical of many hotels,” said Müller, a structural engineer by training.

"The whole project is sustainable," added Von Knobelsdorff. "Even the first step sees valuable resources being conserved due to decommissioned and scrapped freight containers being used." 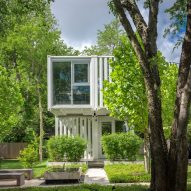 Strip foundations mean the micro apartments could easily be taken apart and the land returned to its former state.

Each container was converted in Containerwerk's dedicated facility and transported to the site on a truck.

These prefabricated elements were then laid on foundations, joined together and covered in cladding and a roof.

Containerwerk was founded in 2017 and specialises in converting decommissioned shipping containers into liveable spaces.

To showcase the potential of container architecture at Milan Design Week in 2018, Containerwerk created a pair of show homes.

In the USA, MB Architecture used stacked shipping containers to create a holiday home on Long Island, and Allford Hall Monaghan Morris created a housing development from them on a former car park in Oklahoma.

Photography is by Stefan Hohloch.