Museum de Lakenhal, a 375-year-old building in the Dutch town of Leiden, has been given a contemporary extension and redesign by Happel Cornelisse Verhoeven and Julian Harrap Architects.

As it had already been extended several times over the years, the arts and crafts museum was also given a new and simplified layout.

Built in 1641 by the architect Arent van's-Gravesande, the Laecken-Halle was originally a centre for the fabric trade.

It was turned into a museum in 1874 and subsequently extended in 1890 with the Harteveltzaal building. The Papevleugel building was added in 1921.

Dutch practice Happel Cornelisse Verhoeven and London-based renovation experts Julian Harrap Architects won the competition to makeover the museum in 2013, promising to simplify the labyrinthine corridors and modernise the building.

The extension is called the Van Steijn building and has a brick facade with concertina-style folds that was designed as a reference to fabric factories and woven textiles.

"It's a new member of the Lakenhal family that refers to the morphology of the large textile factories that stood around the Lammermarkt until the end of the 19th century," added the studio. "These factories were pragmatic brick buildings, but with a proud presence and fine details."

Visitors enter through a gate in the wall and cross a courtyard to the main building, which dates from the 1600s.

The museum shop, cloakroom and cash register have been relocated here to all be in one convenient place.

A path leads to the Achterplaats, a former courtyard behind the main building that has been covered with a glass roof to form a light-filled central hub for the museum. 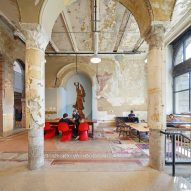 The four wings of the Museum de Lakenhal – the upper floors of the Laecken-Halle, the Harteveltzaal, the Papevleugel and the Van Steijn building – can all be accessed from the Achterplaats.

"The traces from 375 years of building history were preserved as far as possible and left visible," said the studio.

"The special architectural history has been made tangible and legible, so that the museum shows itself as a detailed sampling of time layers again."

In the Van Steijn extension, the ground floor contains more galleries and exhibition spaces, and the museum cafe.

Upstairs there are studios, offices and libraries for the institution staff.

Photography is by Karen Borghouts.