Designer Stephen Burks discusses the lack of diversity in the design industry and explains how his early experiences with European brands led him to work with artisans in the developing world in our latest VDF x Friedman Benda talk.

"I'm trying to find a way to express my identity in some regard," Burks told curator and historian Glenn Adamson in the latest of New York gallery Friedman Benda's Design in Dialogue interviews that we are publishing as part of Virtual Design Festival.

"Because, as you know, international design isn't the most diverse place. It's been my great privilege to be the first and only African American to work with all my clients. And that's kind of crazy. You realise that design is kind of this final frontier of culture."

Educated at the Institute of Design at the Illinois Institute of Technology in Chicago, and then at Columbia University’s Graduate School of Architecture, Burks founded his New York studio, at the time called Readymade Projects, in 1997.

His big break came in 2000, when Italian furniture brand Cappellini put his first designs into production.

"I did my first pieces for Cappellini in 2000 and that was huge and mind-blowing," he said. "It's hard to explain to the current generation how important that was. There were only two or three American designers working in Europe with the big companies when I started."

"Europe very quickly reminded me that I was African American"

According to Burks, his early experiences in Europe made him much more aware of his African heritage.

"Not only was I American, but Europe very quickly reminded me that I was African American," he said, recounting stories of how European media compared him to a basketball player, a jazz musician and even Barack Obama.

"I hadn't really seen myself through that lens," he continued. "I was just there making the things that I believed in."

Burks explained that the stereotyping he experienced led him to steer away from mainstream European industrial design and start exploring his African heritage through his work, which in turn led him to work with artisans across the world.

"It forced me to be considerate of the fact that the politics of design are present, that my politics are present, that they see me in relation to a broader diaspora. We have such rich historic and cultural traditions to draw from that aren't from a European context. So moments like that only pushed me further and further into the field and wanting to make a difference with design."

"Design doesn't include the majority of the world and their culture"

In 2004, Burks worked with Missoni, another giant of Italian design, to create a series of vases covered with fabric offcuts called Missoni Patchwork.

"Those vases and that project with Missoni kind of made me consider, or reconsider, the processes of the means of production," he said. "Did I have to work in this 20th-century model of the designer on tour, the kind of signature designer?" 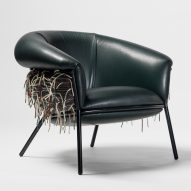 "I like to say that design is a western concept, because it is. We look at the western canon – the industrial revolution in Europe and America, leading to the Bauhaus, leading to the idea that a designer can be in the service of industry. And so all the products and the way that we think about design doesn't include the majority of the world and their culture and their cultural perspective."

"At the time, no-one was really looking at the rest of the world and wondering why aren't these people, the majority world, also participating in what we consider to be contemporary design?"

In 2005, off the back of the success of the Missoni project, Burks was invited to South Africa by non-profit organisation Aid To Artisans and design brand Artecnica to act as a product development consultant. Burks worked with eight craftspeople to develop commercially viable pieces of contemporary design using their traditional craft skills.

"This was a pivotal moment for me, because I'd never been to the 'motherland'," he said.

The project resulted in a collection of painted-wire tables called TaTu, which Artecnica unveiled in Milan in 2007, and set Burks on a path of working with artisans in developing countries all over the world to create products for a host of leading brands, including Cappellini, BD Barcelona, Moroso and Roche Bobois.

"All of that work has led to this perspective of trying to find a way of getting the rest of these people involved in design and trying to find broader markets for them," Burks said.

In 2011, Burks' work with artisans in South Africa, Senegal, India and Peru was featured in an exhibition and monograph titled Man Made, a name that Burks later adopted for his studio to reflect its new mission to "bring the hand to industry".

Burks said he is still working on the best way to include artisans in the developing world in the production and development of contemporary design. But he believes his studio's work is helping to shift the perception of the value of artisanal craft in developing countries.

"I like to compare postwar Italy with what's happening around the world in the places I've worked," he continued. "Most of the companies that we know of in Italian design today were family-owned businesses that were rooted in craft production."

"With investment, they grew into the major manufacturers that we know of today. So if that can happen in 50-60 years in Italy, why couldn't it also happen in Senegal? So I think it's really about how we value and see craft and artisanal production."

Burks' conversation with Adamson is the fourth in a series of Friedman Benda's Design in Dialogue talks we are broadcasting as part of Virtual Design Festival.

Ron Arad told Adamson that "business is always a necessary evil" in the previous discussion we published last week.