Architecture firm Dialog has revealed plans for a cross-laminated timber higher education building in Canada, which it says will be the first of its kind.

The project, called A-Block Building Expansion, is a six-storey addition to an existing building at Centennial College of Applied Arts and Technology in Scarborough, which is about a 20-minute drive from downtown Toronto.

Designed by Dialog and Ontario firm Smoke Architecture, the building will be constructed with cross-laminated timber (CLT), an engineered wood made from laminated timber sections, using locally-sourced Canadian timber.

The use of wood, which traps carbon, will form part of Dialog's ambition to make the building carbon neutral. To achieve this, it will also feature photovoltaic panels on its rooftop and produce enough energy on-site to offset the annual carbon emissions associated with building operations.

Renderings show a flat-roofed, L-shaped building covered in aluminium singles with a white upper portion, dark base and large expanses of glass. Exposed wood pillars and beams inside showcase the construction.

The addition will provide 150,000 square feet (13,935 square metres) of space for academic rooms and common areas for the college's School of Engineering Technology and Applied Science programmes (ICET). The adjacent structure will also be renovated and link to two levels of the new building.

References to nature and designs from Indigenous peoples, also called the First Nations, are key to the project. It is modelled on the concept of Two-Eyed Seeing from Albert Marshall, an Elder of the Mi'kmaw Nation, that combines the strengths of Western and Indigenous ways together.

"Drawing heavily from Indigenous principles, the building is rooted in the concept of 'two-eyed seeing' to help support reconciliation with Canada's First Nations, Inuit and Metis peoples," the team said.

The north facade features a curved corner and a geometric design with windows of different shapes. "The pattern is an allegorical and aspirational response to the underlying structure and Indigenous arts and craft," the team added. 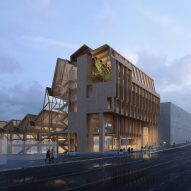 The placement of entrances and rooms is also based on indigenous teachings such as the Medicine Wheel, and the main entrance is on the east side as seen in domed wigwam dwellings made from wood, bark, grass and reeds.

"The position of spaces and the flow through the building are guided by the medicine wheel teachings oriented to the four cardinal directions, and the directions of up, down, and centre," said the team.

Inside are other details of Indigenous art, and a multipurpose room in the centre is shaped like a wigwam and called Indigenous Commons.

"The design of the building is a poetic response to the pattern of seed, growth, culmination, and balance in a continuous cycle," said Dialog.

"The interplay of solid and void in the building massing allude to the drawing back of the skins over a wigwam frame in response to seasonal changes."

Images are by Dialog.