The travel and tourism industries will be changed forever by the coronavirus pandemic with less focus on major tourist destinations, says Airbnb co-founder Brian Chesky.

"Travel as we knew it is over," Chesky told American news channel CNBC during an interview with Deirdre Bosa. "It doesn't mean travel is over, just the travel we knew is over, and it's never coming back."

Chesky, who founded online holiday rental service Airbnb with Joe Gebbia and Nathan Blecharczyk in 2008, was explaining how the coronavirus pandemic has impacted the business when he made several predictions about the future of travel.

There will be "a redistribution of where people travel"

He believes that after the pandemic subsides, people will travel less to major tourist cities and will instead choose to visit less well-known destinations.

"No one quite knows what it will look like," he said. "But I have a couple of thoughts."

"I do think that instead of the world population travelling to only a few cities and staying in big tourist districts, I think you're going to see a redistribution of where people travel," he continued. 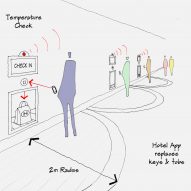 Although the company was impacted heavily by the pandemic and the subsequent travel bans and lockdowns imposed by many countries, Chesky believes that travel for tourism will return – albeit in a different form from before the pandemic.

"We spent 12 years building Airbnb business and lost almost all of it in a matter of four to six weeks," he said.

"I think that travel is going to come back," he continued. "It's just going to take a lot longer than, you know, we would have thought and it's going to be different."

"Work from home also could be work from any home"

In the United States Chesky reports that at the beginning of June, Airbnb had the same volume of bookings as it did in the same period in 2019. These bookings are due to people travelling domestically, he believes.

"What they are willing to do is get in a car and drive a couple hundred miles to a small community where they were willing to stay in a house."

As well as more local tourism, Chesky believes that Airbnb could benefit from an increased focus on working from home, with people able to work from any location or property.

"I think more people are going to work remotely and work from home also could be work from any home," he said.

"And that's an opportunity for Airbnb because you're going to see major population redistribution on the table."

Architects and designers have been trying to predict how the pandemic and the need for social distancing will impact different types of building. In the UK the Manser Practice envisioned the post-pandemic hotel and also suggested that an increased focus on cleanliness may lead to the death of rental services like Airbnb.

"People will want the assurance of properly maintained, clean space," Jonathan Manser, CEO of The Manser Practice, told Dezeen. "Could we see the demise of the Airbnb model as consumers move towards assured cleanliness?"

Photo is courtesy of Airbnb.