Arup collaborated with the city council and Meristem Design to develop the scheme, called Liverpool Without Walls. The modular elements slot together to create outdoor seating areas made from hardwood, screened from each other with plants and perspex glass.

"The modular parklets are designed to be easily swept up, cleaned and washed down with flexible furniture which can be easily moved," said Arup's Jonathan Mottershead.

"The cafe-style seating means that chairs and tables to be easily stacked for cleaning," he told Dezeen.  "This will also enable businesses to manage customer spacing more flexibly, such as catering for different group sizes."

Nine parklets to be installed in Liverpool

Starting on 4 July the first of nine parklets will be installed on Bold Street, a thoroughfare in the city with many bars and cafes.

From 4 July in most parts of the UK pubs, restaurants and cafes will be allowed to open as part of changes to the country's lockdown rules. Only groups made up of members of two households will be able to sit indoors while dining out, however.

Groups of up to six people who are not from the same household can only gather outdoors. This means venues will need more outdoor seating and ways of keeping customers a safe distance apart. 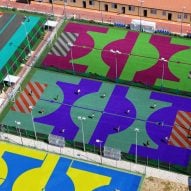 Arup got the idea for the parklets from the firm's 2017 scheme called FitzPark – a temporary seating space dotted with planters installed in London's Camden neighbourhood.

"We felt that we could easily take the parklet design and adapt it to make it safe to meet social distancing guidelines to help give the bars, restaurants and cafes in Liverpool much needed outdoor space," said Mottershead.

Arup has designed four different types of parklet for Liverpool Without Walls that could be installed in parking spaces, on pavements, streets and in larger open spaces.

"Traditional parklets are those that occupy a former parking space, loading bay or single traffic lane on the carriageway," explained  Mottershead. "Pavement parklets are in spaces off-road and do not require changes to traffic or road closures," he added.

"Street parklets usually close a whole street by placing planters and vehicle security barriers at the ends of the road so that seating and parks areas can be installed. Finally, Bespoke parklets are considered for larger car parking areas or unusual shaped spaces."

The greenery element of the scheme, said Arup, is a key part of making sure the parklets actively improve the public space while performing their function during the pandemic.

"Hardy, drought-tolerant shrubs and perennials such as ivy, periwinkle, asters and lavender will be used to provide a variety of colour, textures and scents through the season," said Arup landscape architect Emily Woodason.

"Liverpool City Council really wants this to be a community project and are encouraging local businesses to support with watering the greenery and also helping chose the planting selection," she added.

"For example, a restaurant may wish to plant edible herbs or to grow strawberries for use in the kitchen." 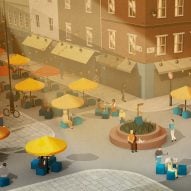 The council is also looking at other streets that could benefit from having their own parklets. Arup designed the parklets, which take six to eight weeks to build and install, to last for up to five years. After the pandemic, the council can move them around to new spots.

"We hope the parklets become part of the independent fabric of the streets they are situated and stay providing long term benefits in reclaiming the streets for people," said Mottershead and Woodason.

Designers around the world have been responding to the coronavirus pandemic with solutions for cities to reopen safely.

Architect Ben Masterton-Smith has designed a scheme for London's Soho neighbourhood that includes decorative hygiene screens. In the US, MASS Design Group has released a report on how restaurants could be adapted.