Architecture firm PPAA has created a pair of slender houses in Mexico City that have rear patios accessed by glass doors to flood natural light inside.

The local practice designed the Pachuca project for a plot in the Mexican capital measuring eight metres wide and 16 metres long.

The site was originally intended for an apartment block but PPAA decided to split it into two matching homes.

One of the main challenges was to ensure that each of the slender homes received plenty of natural light and ventilation.

In response, the team designed the levels to gradually reduce in size towards the top of the property in order for natural light to enter. The garage is located on the street level, the living areas on the first floor, and bedrooms on the top two.

Glazing with black gridded frames fronts the first and second floor of each house facing the street, matching a glass door that opens onto a patio at the rear of the first floor.

"Taking advantage of the east-west orientation of the plot, we opted for a series of stackable spaces, that will get light and ventilation from the street at the front, and from a private and contained patio on the back," said PPAA.

"This resulted in two houses with independence and privacy in all their spaces," it added.

The glass door to the patio opens so it sits flush with the concrete wall between the two home's patios. The idea is that when it is open it creates a continuation between the living and dining room and the outdoor area.

An outdoor concrete bench, which has a window underneath offering light down to service rooms on the floor below, runs along the opposing wall, while the rear wall is fitted with a planter.

Exposed concrete walls and flooring of the patio continue inside the house, where the aesthetic is similarly minimal. 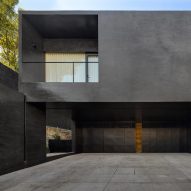 Designs include a long dining table, described as an "essential element in the space", as well as kitchen cabinetry and a staircase. These elements are all placed on one wall so as to keep the main area open, but are designed differently in each house.

For example, one staircase has treads that slot into a huge bookshelf, while the other stairs are fronted by wood panels to keep a boxy shape.

In both homes, the staircases lead up to the second floor, which includes a studio that opens onto a terrace at the front and a bedroom at the rear. Another bedroom with an en-suite bathroom is located on the top floor.

PPAA, which stands for Pérez Palacios Arquitectos Asociados, has completed a number of residences in Mexico City.

Others include Lluvia house, which contrasts black facades and pale interiors, Tlalpuente house, designed to merge with a wooded landscape, and Casa Sierra Fría, which is built with board-marked concrete walls.