San Simon Cabins is a compound that comprises five individual structures including guest houses, a main lodge and a recreational building on a wooded site in the scenic Valle de Bravo region, which is west of Mexico City.

Weber Arquitectos separated the design into several structures as building a single house on the land would have required knocking down trees.

Staggering the individual volumes across the 5,000-square-metre site is intended to blend the architecture and landscape together.

"Instead of a large joint footprint that required the felling of several trees, the different cabins move between the gaps that naturally exist between the trees, also integrating them into the architecture at all times," the studio said.

The main residence and social cabin are rectangular in plan and constructed with grey volcanic stone. Windows of various sizes are scattered across their facades and fronted with wood lattice screens.

Each of the three guest accommodations has a slanted roof and is raised on a plinth formed by rectangular blocks of volcanic stone.

One of the cabins is a double-unit with a bedroom attached to either side of the shared bathroom in the building's centre, while the other two are standalone structures with one bedroom and bathroom each.

A covered terrace is situated under the roof at the front of each of the guest cabins. Other canopies protrude to cover additional outdoor spaces. 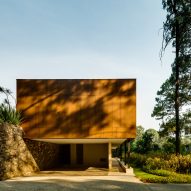 In the centre of the patio coverings, on the main cabin and recreational building, the studio has created a round opening large enough to fit a tree trunk.

Inside the cabins the dark hues used on the exteriors are continued with similar materials and dark-coloured furnishings.

"The colour palette in general is very sober and forceful: greys both on facades and interiors, as well as bathroom fixtures and black luminaires," the studio added.

In the main cabin the floors are covered with volcanic stone and stave and pine wood beams span the ceiling.

The open kitchen faces the living room furnished with a grey sofa and wooden storage unit that comprises boxes and shelves attached with thin metal rods.

A long wood island forms a gathering space in the kitchen, where the grey cabinets match the volcanic stone used to form the backsplash.

A full kitchen, lounge and dining area located on the ground floor of the building overlook its lower level, occupied by a dimly lit game room with a pool table, poker table and bar.

A massive shelving unit spans two floors inside the social cabin, forming the bar cabinet on the lower level and book storage on the upper level.

Bathrooms in each of the buildings have interior patios filled with green vegetation. A circular jacuzzi and round fire pit are located amidst the wooded property.

The Valle de Bravo region is about a 140-kilometre drive to the west of Mexico City. Other in the area include a boxy house with charred wood and dark stone walls and a complex of five rammed-earth structures and pitched roofs.

Photography is by Sergio López.