All eight looks in the Daylight Matters project were made from reclaimed vintage garments, textile industry offcuts and antique fabrics such as curtains and parasols. Kim chose the used materials as a way to address the 92 million tons of textile waste generated by the fashion industry every year.

"Textile and garment manufacturing causes environmental pollution and printing wastes a lot of water, only for the garments to eventually be discarded and cause more damage to the environment," Kim told Dezeen.

"That's why I decided to make every constituent element of a garment including the fabric, buttons and zips from reclaimed materials," the designer continued. "Just over half of the garments also use a square cutting pattern to minimise waste."

The finished garments were then placed on mannequins and left out in the sun for up to five months to fade naturally, while also cutting out the large amounts of water and harmful chemicals used in standard dyeing and production methods.

Kim intends the collection to be a rallying cry against throwaway culture and hopes to create a new kind of appreciation for the process of sun fading through clothes which, much like wine, increase in value as time progresses.

That's because, over the course of several months, Kim's method creates permanent patterns, which respond to the unique materiality and shape of an item. As long as a piece is left out in the sun, any exposed areas are bleached to a lighter shade while the nooks and crevices that are naturally left in the shadows maintain their original darker colouring. 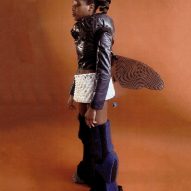 "Rain promotes sun fading and wind moves the garment little by little," said Kim. "Such small movements create gradations and create a visual depth that could never be created with printing."

To amplify this effect, the clothes themselves draw heavily on the kind of draped, loose silhouettes often worn in warmer climates, as these offer plenty of dimensions for the sun to play with.

A dark blue trench coat was exposed to the sun while tied with a belt and with several embellishments pinned to the front, which left ghostly impressions of themselves behind.

Kim used antique velvet curtains to fashion a long jacket reminiscent of a bathrobe, which over the course of three months faded from midnight to pale baby blue.

Meanwhile, an orange velvet bomber jacket was displayed with the sleeves rolled up, bleaching it to a light peach colour everywhere except for the creases on the arms.

This is paired with a set of two-toned trousers, fashioned from fabric offcuts that were sourced from a local garment factory.

"Present-day fabrics have more chemicals in them than vintage ones, so they fade a lot slower," said Kim. "The trousers had to be left out for five months for part of the leg to fade from deep black to light grey."

Kim, who was born in South Korea, has previously designed for French label Lemaire as well as working as a design assistant at Louis Vuitton under Virgil Abloh.

Other notable collections from this year's CSM graduates have incorporated drapery and chair frames as well as beanbag attachments to create unconventional garments.