Chinese studio Onexn Architects has squeezed Joys cafe into a space less than 2.6 metres wide in a street in Shenzhen, which used to house an air conditioner repair shop.

Narrower than one of the parking spaces outside, Joys serves drinks and pastries from a counter behind an entryway framed by built-in shelves and benches.

Seating spills out into the street outside. Inside, private office space on a mezzanine floor above the counter is accessible via a retractable ladder.

Despite its small size, Onexn Architects wanted the nine-square-metre cafe to encourage local residents to connect with each other.

Joys is located in Xiangmi Third Village, a part of Shenzhen that was built in the 1990s. In recent years, the area has lost many of its community facilities, and its green spaces have been turned into high rise developments.

"One of the goals that we shared with our client was to restore a public node on the premise of meeting functional needs," explained the architecture studio.

"The first time we inspected the site, we found many air-conditioning parts and oil stains were scattered in front of the entrance, so people had to detour to pick up clothes from the laundry or take medicines from the pharmacy next to the repair shop," added Onexn Architects.

"There was limited space where residents could stay since the site left a mingled, neglected or blurred impression."

To create a more welcoming entrance, Onexn Architects removed the existing lightbox and created a front with a high porch that shelters the tall glass doors that both swing open.

While the cafe is under 2.6 metres wide, the porch is almost five metres tall, making it almost twice as tall as it is wide.

Spotlights in the porch underneath the cafe sign also light up at night to attract the eye.  A narrow slit window above the door lets daylight in during the day and lights up after dark. 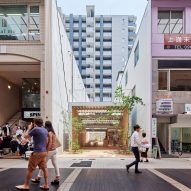 On the other side of the door, a ceiling installation that curves towards the apex of the room changes the dimensions of the interior space.

"It mitigates the oppressive feeling in this cramped and high space and brings a sense of mystery and ritual to it as well," said Onexn Architects.

Wooden box shelves are stacked in a grid-like formation either side of the door, continuing up over part of the ceiling. This design is meant to be a space-saving solution that doubles as a decorative installation that adds to the cafe experience.

At the base, boxes topped with cushions protrude from the shelves as bench seats for customers. Cupboard doors below conceal extra storage space.

The shelves frame the cafe counter, which faces towards the door. Behind, in the staff area, there are worktops, coffee machines and bakery equipment. The ladder to the office mezzanine floor can be retracted when not in use to save space.

Joys interior and exterior are covered in the same pale grey paint that resembles cement. Dark grey floor tiles continue from the inside of the cafe out over the pavement and end at the curb.

The white shelf and seating system has pops of colour in the form of mustard-yellow inserts. Building in such a tight gap involved negotiating with the shops either side.

"During construction, the warm-hearted neighbours would often offer us advice on design ideas," said Onexn Architects.

"We resisted initially, but gradually realised that raising opinions and keeping communication in such a symbiotic environment was significant," added the studio.

"The wall on the right side of the entrance, which we call a spontaneous design, is a cooperative achievement of the neighbours and us."

Onexn Architects preserved a low flower bed on one side and the space for a community sewing machine on the other.

Founded by Bo Zhang and Jingjing Wang in 2015, Onexn Architects is based in Shenzhen.

More eateries in small spaces include this cafe and pocket park built in the space left by a building destroyed by an earthquake, and a streamlined coffee bar that features zero furniture.

Photography is by Li Jinhui.