Snøhetta has unveiled visuals of a landmark city hall for Cheongju, South Korea, which will incorporate public spaces and use the existing government building as its entrance.

Slated for completion in 2025, the Cheongju New City Hall has been commissioned to consolidate the government's administrative offices that are scattered throughout the city.

Snøhetta's design, developed with local studio Tomoon Architects and Engineers, is intended to "integrate seamlessly with the urban context" and minimise the distance between the government and local people.

To achieve this, the scheme will preserve the existing, traditional city hall on the site, and introduce a number of social and cultural facilities for the public.

"While providing a platform for effective governmental administration, the Cheongju New City Hall will serve as a symbol of integration and accommodate for collaboration and social interaction," explained Snøhetta.

"Through strategic spatial planning, ample public spaces and amenities are designed to be accessible for all, with flexibility to allow for the vibrant city to gather for daily activities and during special occasions."

Snøhetta's proposal for Cheongju New City Hall was the winning entry of an international architecture competition for the building, initiated by the Korea Institute of Architects.

According to the jury, the entry was chosen as it "will both stand out as a new landmark for the city, while at the same time providing well-balanced and generous public space".

Cheongju New City Hall will take the form of a large, open frame that folds up around the existing city hall, which will be transformed into an "entrance portal".

This folded form will be crowned by a roof of gently undulating, orange-hued cladding, modelled on to the shape of traditional Korean roofs. 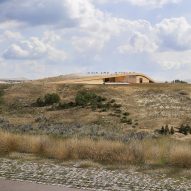 The distinctive cladding will comprise a mix of translucent and opaque panels. The translucent panels, which will be made from glass laminated with copper mesh, will allow light to enter the building, while the opaque parts function as solar shading.

According to Snøhetta, some of these panels will also be openable to facilitate natural ventilation and incorporate photovoltaic panels to harvest solar energy for electricity.

Though details about the Cheongju New City Hall hall's interiors have not been revealed, the offices will be configured to facilitate communication and collaboration between different departments.

Among the public facilities will be exhibition spaces, a library, an auditorium, restaurants and cafes, childcare facilities and a post office.

Snøhetta is shortlisted for the Dezeen Awards 2020 in the Landscape project category for the Path of Perspectives – a cantilevered viewing platform it has made from weathering steel for a mountain walking trail in Innsbruck, Austria.

Visuals are by Snøhetta and Plomp.