Sportswear brand Adidas has worked with design studio Kram/Weisshaar to create a robotically woven upper called Strung that can be made to the exact specification of athletes.

Described by Adidas as a material revolution, the upper is woven from multi-directional threads by a robot that is programmed to the exact requirements of the wearer, incorporating factors such as their individual stride and foot shape.

"Knitting and weaving have been around for centuries, and for the first time we are able to break away from the constraints of those more traditional materials," he told Dezeen.

"With the bespoke software and robotics, we are able to place threads of different material types in any direction, which is a first across industries."

The additive-manufacturing process means that a lightweight and stronger upper can be made with threads placed exactly where they are needed for strength or flexibility.

"Strung allows us to create something that's traditionally really hard to achieve at the same time. An upper that has really precise fit and support, while also being super lightweight," said Adidas innovation designer Andrea Nieto.

"This is also the first time we have been able to get rid of the parts and pieces that we usually need to make a shoe and build all the performance features into a single piece," she told Dezeen.

"The result is probably the highest resolution and most anatomically accurate upper we have been able to make, which as a result moves with the body in a different way."

The Strung upper is constructed by feeding broad athlete data, along with an individual's requirements and feedback, into a computer that programs where each thread is placed.

"With all of the sports science data we have, we have a closer understanding of the athlete, how they move and their needs," said Nieto. "Strung allows us to build to a new and more precise resolution that can match this high res data," 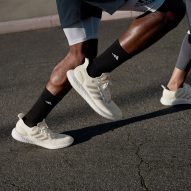 "We program each thread that goes into the upper to build to these insights," she continued. "This is a constant loop of designing, simulating, making and testing."

"The result is something that feels very different from other footwear, because of how closely it's built to match the natural movement of the foot."

Adidas partnered with design studio Kram/Weisshaar to develop the robot and the process that was used to create Strung.

"The robotic additive manufacturing environment allows us to create a lightweight upper where each thread is strategically placed for a seamless, lightweight fit," said Kram Weisshaar co-founder Clemens Weisshaar.

"Delivering coded-in functionality in the exact spot where the athlete needs it within a single piece of material, free from inhibiting excess components or seams."

Kram/Weisshaar's code and robot allows the designers at Adidas to visualise their designs in a virtual environment and then quickly manufacture them.

"We wrote the code and designed the robotic cell to build a Strung upper in a matter of minutes," Weisshaar said.

"The robot is only the muscle – what makes Strung so special is its brain," he continued.

"We built software that delivers the deep knowledge of the brand into the virtual workspace. And with the help of the physical module – the robot – in minutes onto the designers' and developers' desk."

At present, the Strung upper is being developed for elite athletes but Adidas is aiming to scale up production with the aim of producing a commercially available shoe at the end of 2021.

"Futurecraft Strung is a moment in time where we focused on a very specific athlete insight to push the technology forward," said Adidas's Corcoran-Tadd.

"It's a proof of concept shoe to show how broad Strung's potential is, but also how targeted it can be. We have only scratched the surface of what's possible, and the feedback we are getting from athletes is letting us know we are onto something really exciting."

The Strung upper is the latest innovation from the company's Futurecraft project. Last year it created the fully recyclable Futurecraft Loop sneaker, which can be ground up and remade again at the end of its life.

Speaking to Dezeen, the sportswear brand's eco-innovation programme leader Dharan Kirupanantham said embracing the circular economy was the only way for brands to achieve business success while safeguarding the planet.

Photography courtesy of Adidas unless stated.