Located near the tip of the Antarctic Peninsula, the teal-hued 4,500-square-metre facility houses the naval service's Brazilian Antarctic Program, replacing its 1980s base that was ravaged by fire in 2012.

It also contains shared living areas, a gym and a library, incorporated by Curitiba-based Estúdio 41 to support the wellbeing of the occupants and offer them respite from the Antarctic's inhospitable landscape.

"The challenges of designing a building for this landscape was creating a shelter, a safe place," studio architect Eron Costin explained.

"In certain parts of the planet, nature sometimes creates harsh conditions for the human body," he told Dezeen.

"To design a building in these places is almost like building a garment, an artefact that protects and comforts. It is an issue of technological performance, but it must go hand-in-hand with aesthetics."

Comandante Ferraz Antarctic Station is powered by solar panels and wind turbines. It measures twice the size of the Brazilian Navy's original base in order to accommodate more researchers.

The two linear volumes are aerodynamic, helping to reduce the drag of Antarctic winds that can reach up to 200 kilometres per hour, and elevated on stilts to prevent snow accumulation. They are positioned at different heights to ensure each space has an outward view. 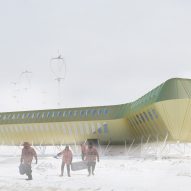 Due to the remoteness and harsh climate of the site, the Comandante Ferraz Antarctic Station had to be entirely prefabricated.

Its parts were manufactured in China and then shipped to Antarctica over the course of three years, with construction only taking place during the four warmest months of each one.

The facility's structure is made out of carbon steel, a form of steel with a high carbon content that was chosen for its durability and ability to withstand Antarctica's harsh climate.

Its teal-coloured facade is made of 22-centimetres-thick sandwich panels that combine two metal sheets with thermal insulation made from polyisocyanurate – a type of thermoset plastic.

Inside, the interiors of the facility are designed to accommodate the best technology available for the researchers, while creating a spacious and comfortable environment.

All the finishes are bright and minimal, with all rooms complete with a window to help boost occupant wellbeing and create a connection to the outside.

Other recent projects based in Antarctica include Kuryłowicz&Associates' proposal for a golden research centre and the Discovery Building for the British Antarctic Survey by Hugh Broughton Architects and Ramboll with NORR and Turner & Townsend.

Photography is by Leonardo Finotti unless stated.